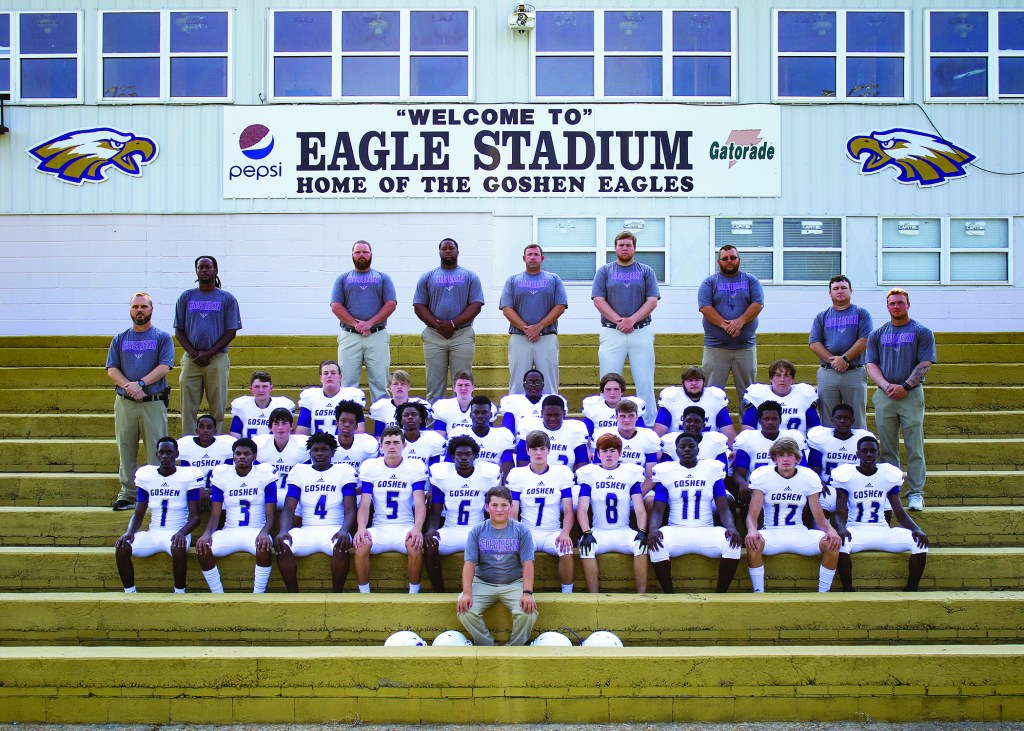 April Brown | The Messenger After forfeiting their game last Friday night, the Goshen Eagles will open the season on Friday night against Ariton.

After missing last week due to COVID-19, The Goshen Eagles returned to the field this week to prepare for their season opener against Ariton on Friday night.

Days before their scheduled opener against Holtville last Friday night, Goshen received the news they would have to wait a week to open their season due to having a player test positive for COVID-19. One week later the Eagles are healthy and eager to get to work against rival Ariton.

“We are doing ok,” head coach Don Moore said. “Today (Thursday) is our third day of practice for the upcoming game because the players didn’t get back until Tuesday. It’s been a little bit of a struggle especially with the heat and the conditioning. Trying to get them back in playing shape. We are excited and ready to get out there and go compete.”

The Eagles had all but about three or four players in quarantine and away from campus.

“We were kind of at a standstill,” Moore said. “The coaching staff got back to work on Friday night. As far as preparations go, the coaches were ready and prepared for when the kids got back on campus to get them ready. We had a couple days of practice and we are trying to get four days of practice in three days. It’s difficult especially after being out for so long.”

Goshen’s first opponent will be rival Ariton, who is coming off a 38-27 win over Dale County last week. Moore is very familiar with Ariton from his time as head coach at Dale County.

“It’s a very typical Kilcrease coached team,” Moore said. “Coach Kilcrease and his staff do a very good job over there of getting the players ready to play. They are very disciplined and they are very big up front, especially their defensive lineman. They are an all around team. It’s what I expect from Ariton with coach Kilcrease at the helm. They seem to be really wanting to establish the run this year. They have a really good quarterback and they have some receivers. The offensive line likes to fire off the ball and get hands on you. We are going to be up for a fight tomorrow night fore sure.”