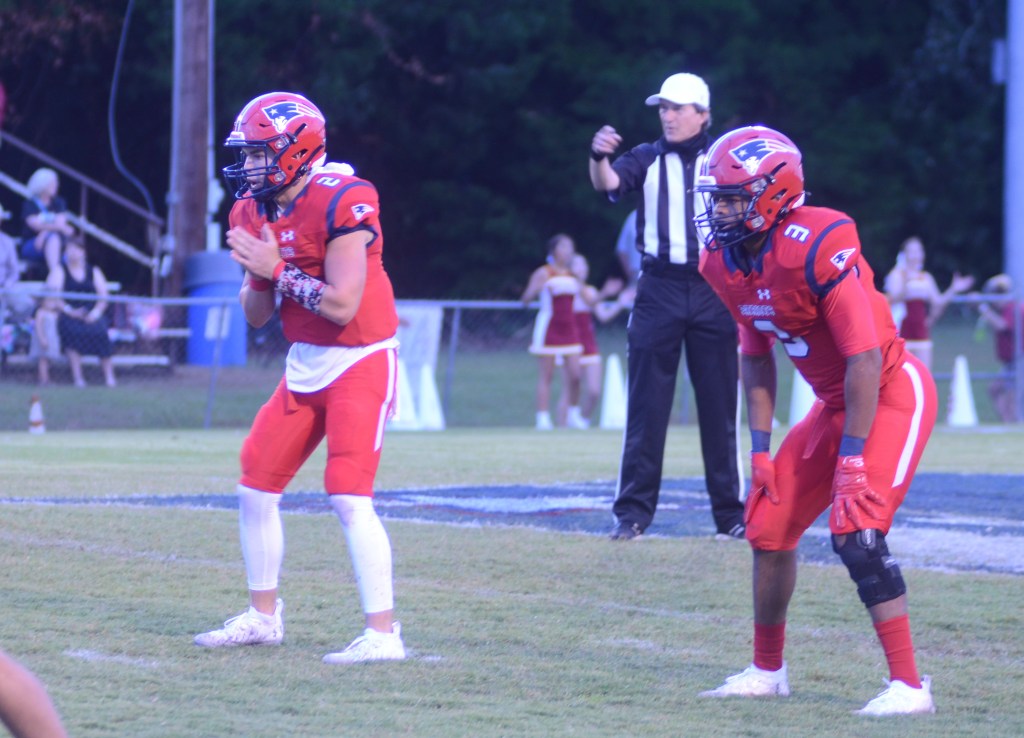 Mike Hensley | The Messenger Patriot quarterback Cason Eubanks awaits a snap with running back Zakevin Pennington in the backfield.

The No. 1 Pike Liberal Arts Patriots fell No. 3 Escambia Academy 42-26 on Friday night in Troy.

After trading scores in the opening half, the Patriots were outscored by the Cougars 29-7 in the thrid and fourth quarters.

Four different Patriots scored in the contest. Quarterback Cason Eubanks, in his first career start with the Patriots, had two rushing touchdowns.

It didn’t take long for the Patriots to score in 2021. They took their opening possession and scored their first touchdown on a 14-yard touchdown run by Eubanks. The Patriots led 6-0 after a missed extra point.

Quarterback Chase Bell had success running the football against the Patriot defense. In the Cougars’ opening position, Bell, on a quarterback keeper ran for 36 yards to later set up his own seven-yard touchdown run. A successful extra point gave the Cougars a 7-6 lead.

The Patriots regained the lead during their first possession of the second quarter. Zakevin Pennington capped off a five-play, 82-yard drive with a one-yard touchdown run.

After a failed two-point conversion attempt, the Patriots owned a 12-7 lead.

After another rushing touchdown put Escambia up one with 2:28 remaining in the half, the Patriots had a seven play, 74-yard drive to end the second quarter. Kam Baker gave the Patriots a lead with a three-yard touchdown run, sending the game into half time with the Patriots leading 19-13.

The Patriots’ lone touchdown came on a 42-yard run by Eubanks, bringing the score to 28-26 in favor of the Cougars with 2:23 remaining in the third quarter.

The Cougars pulled away with two fourth quarter touchdowns.

Eubanks led the offense with 99 rushing yards on 16 carries. He completed six of his 15 passes for 113 yards.

The Patriots will be back in action next week when they travel to Luverne to take on Crenshaw Christian.