Troy athletics to be showcased during OneTroy Weekend 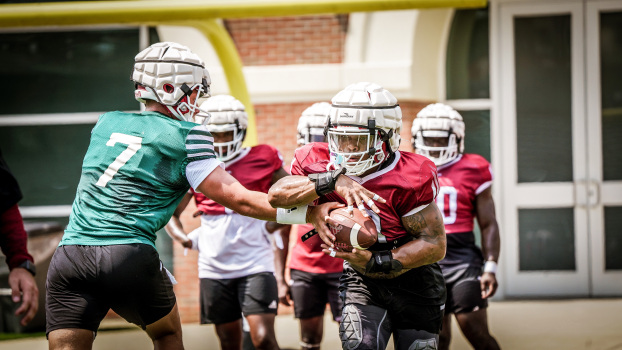 Contributed photo/Troy Athletics | The Messenger The Troy football team will scrimmage on Saturday as part of OneTROY Weekend.

It’s going to be a busy weekend for Trojan Athletics.

OneTroy Weekend is the unofficial kick off to the fall athletic season and three Troy teams will be in action.

The weekend will include a pair of soccer games, a volleyball match and a football scrimmage.

“We can’t wait to welcome Trojan Nation back to campus for OneTROY Weekend,” Director of Athletics Brent Jones said. “Our student-athletes, coaches and staff have been working tirelessly this summer in preparation for the upcoming season, and OneTROY Weekend will be a tremendous way to celebrate with Trojans One & All.”

The Trojan football team will begin the weekend with a scrimmage beginning at 10 a.m. at Veterans Memorial Stadium.

The first 500 fans in attendance will receive free sausage dogs. Free food and beverages will be served beginning at 11 a.m.

The South End Zone Plaza will serve as the Kids Fun Zone with inflatables and tailgate games.

Following the football scrimmage, fans can get their first look at the Trojan volleyball team as well is it’s new-look court when Troy hosts Kennesaw State in an exhibition match beginning at 1 p.m.

Admission to all volleyball matches are free. The first 200 fans to Saturday’s match will receive a free Conecuh Dog. Fans will also be able to take home a free volleyball schedule poster.

The Troy Soccer team will open and close OneTroy Weekend. The Trojans host Nicholls State at the new-look soccer complex beginning at 7 p.m. They will close out the weekend with a game against Alabama A&M on Sunday beginning at 1 p.m.

Fans will be able to take home a free schedule poster during the Friday night game.