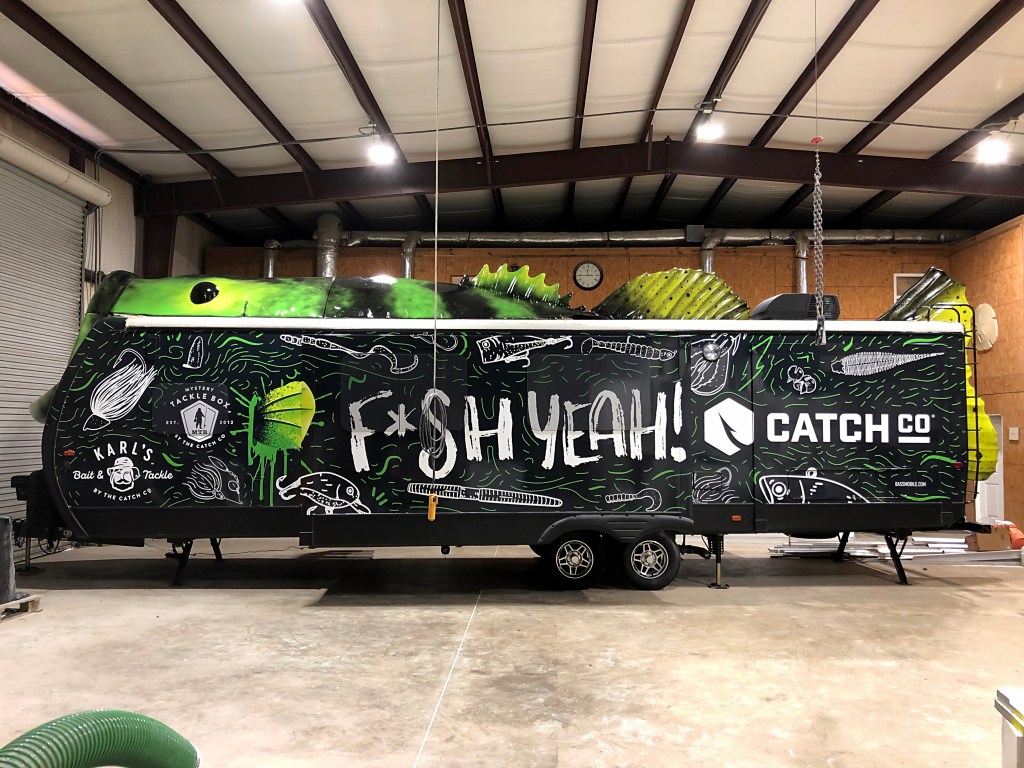 Jaine Treadwell | The Messenger The bass on top of the Catch Co. Bassmobile was created by Jeff Ryan of Blockwire Manufacturing in Goshen.

A tall order had Jeff Ryan of Blockwire Manufacturing in Goshen scratching his head.

Ryan’s 3D foam sculptures can be found all across the globe, from America’s East Coast to the West Coast, up to Alaska, in Africa, Australia and throughout Europe however …

The challenge to create a “big bass” for Catch Co.’s Bassmobile, was a “head scratcher,” but one that Ryan welcomed.

The tall order, as presented by Catch Co., was for Blockwire Manufacturing to create a big bass for the company’s Bassmobile, a converted RV, that would be a six-month, traveling roadshow designed to spread the joy of fishing to the 55 million Americans who participate in the sport each year, and also to inspire even more people to go fishing.

“Catch Co. designed the vinyl wrap for the 32-foot travel trailer,” Ryan said. “Blockwire was asked to design and sculpt a 3D, large-scale bass for the top of the RV.”

Ryan has been creating 3D foam sculptures since 2008. He has sculpted everything from monument signs to the Michelin Man to poolside fountains.

And, Ryan is the main man. From the promotion of his foam sculptures to creating technology to the actual final, hard-coat painting, he is “on the job.”

The challenge of the big bass was that it would be “swimming” atop a moving vehicle that was home to two, young Catch Co. ambassadors. Tyler and Benny were selected for a six-month tour of duty and will be the faces of Catch Co. at everything from industry trade shows to fishing tournaments to college football games and NASCAR races.

“But, the top of the RV would not be a flat surface,” Ryan said. “And, there were rooftop vents to consider, to work around. So, the biggest challenge with the Bassmobile was building the large pieces to fit the shape of the trailer. Laser scanning the trailer came first and working with my friend Van, who is a great digital artist, really helped.”

Working from the scans and working together, the two 3D foam artists began to create a really big bass from 4×8-foot slabs of hard foam.

Turning rectangles into a creature with a pointed head, terminal mouth, narrowed caudal peduncles and a forked tail takes time, talent and technology.

The big bass had to be constructed so that it fit atop the RV without any interference and so that it would showcase itself proudly while traveling the nation’s highways and at events from schoolyards to bass championships.

The foam blocks were shaped and fit-tested.  With only a few adjustments, the big bass form was a perfect fit for the RV.

Then, came the task of painting the fish form to look bass-like.

“A bass is really a lot of funky colors,” Ryan said. “But, getting it the right colors was important. The fish had to look like a bass and that was not easy.”

A bass is shimmery dark-green olive in color that fades to yellow and has dark splotches. That was not easy to duplicate but the Blockwire bass looked every bit the part of a big bass.

And, when the Bassmobile pulled away from Blockwire Manufacturing and embarked on its six-month cross-country tour, it was with the assurance that Catch Co. has the biggest catch yet.

The Bassmobile is scheduled to attend dozens of events around the country, including industry trade shows, fishing tournaments and college football games, where consumers can learn about Catch Co. products and discover more about fishing.