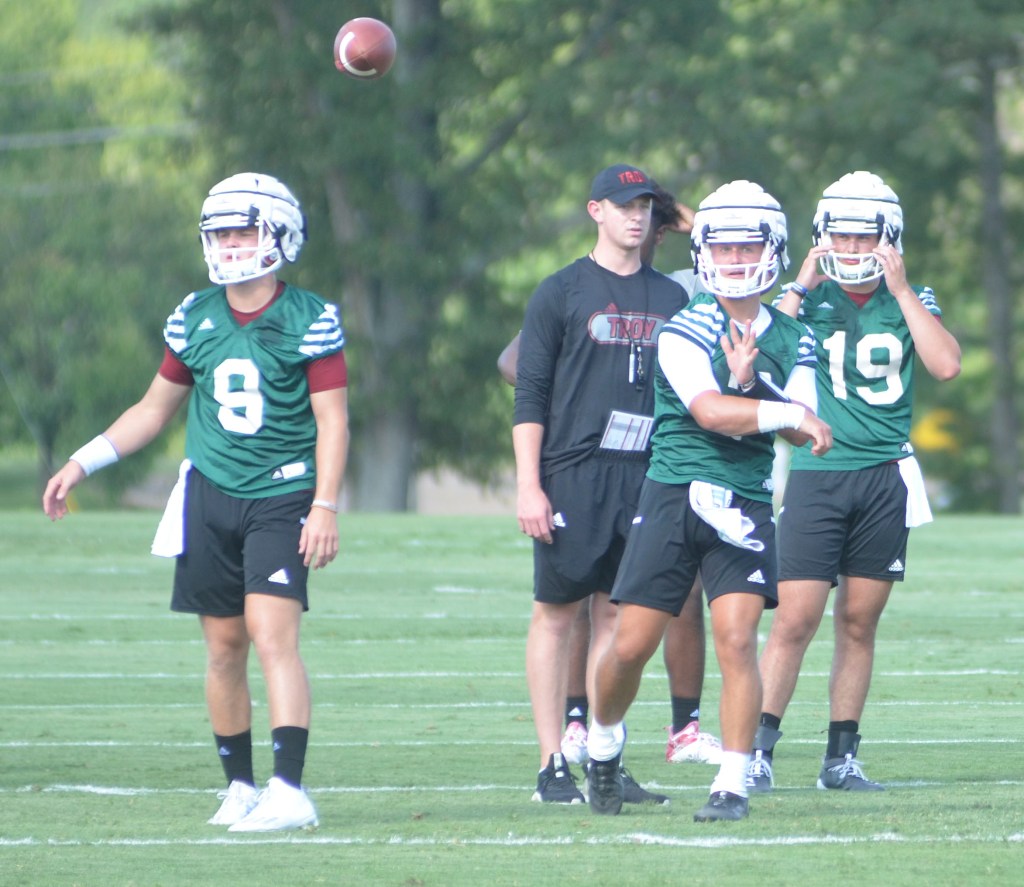 Mike Hensley | The Messenger The Troy Trojans opened fall camp on Friday afternoon outside of Veterans Memorial Stadium on the team practice fields.

The Troy Trojans began their final preparations on Friday afternoon when they held their first of five fall camp practices on the team practice fields.

The Trojans will open their season on Sept. 4 when they host Southern. On Friday the Trojans began preparations for a season they hope ends with them having a successful year in the Sun Belt Conference.

“Not a bad first day,” head coach Chip Lindsey said. “Weather was really good. Hopefully we’ll watch the film and see that we took advantage of it. Really liked the way our energy was especially early. I was really pleased with the effort, energy, attitude and body language. Good start for the first day.”

The Trojans were scheduled to practice approximately 90 minutes in their initial practice of camp. The Trojans exceeded that and practiced over two hours.

“We wanted to gas them a little bit for sure,” Lindsey said. “Try to extend them and see what kind of shape they’re in. There was a lot of teaching too, so a lot of the individual periods were used more for teaching than full speed reps. That’s by design, trying to save their legs a little bit for the team periods.”

The Trojans will get an abbreviated camp heading into the season. The Trojans will practice a total of five times, with camp wrapping up on Tuesday before school starts on Wednesday. Because of that, the Trojans are practicing with a sense of urgency.

“You feel like you have to get a lot done when your camp window is not very long,” Lindsey said. “I hope we have a sense of urgency every day. What I like is the fact that we have more bodies than we have had. We are counting on guys to step up and get a lot of film so we can see and evaluate. Just try to make decisions based on that.”

The Trojans enter the season returning 19 of 22 starters from last season. During the limited practice time, Lindsey and the coaching staff will attempt to get work with both the veterans and the more inexperienced players as much as they can.

“For a lot of these guys this is their fourth or fifth camp,” Lindsey said. “Camp is camp and it’s an all day thing. We get a lot of time with them. We are not limited and we get a lot of meeting time and practice time and weights are involved. It’s a long day for them. Hopefully they get their rest tonight, hydrate and get out here and be able to put themselves on film.”

The Trojans will put the shoulder pads on for the first time during their Sunday practice and wear them for the duration of camp. In each practice the Trojans are breaking in a new piece of equipment, a guardian cap that fits over the outside of the helmet for added protection.

“It’s something a lot of people around the country are doing,” Lindsey said. “We did some research on it. Trying to prevent and protect our guys as much as we can. Different for sure, but hopefully it will help us.”