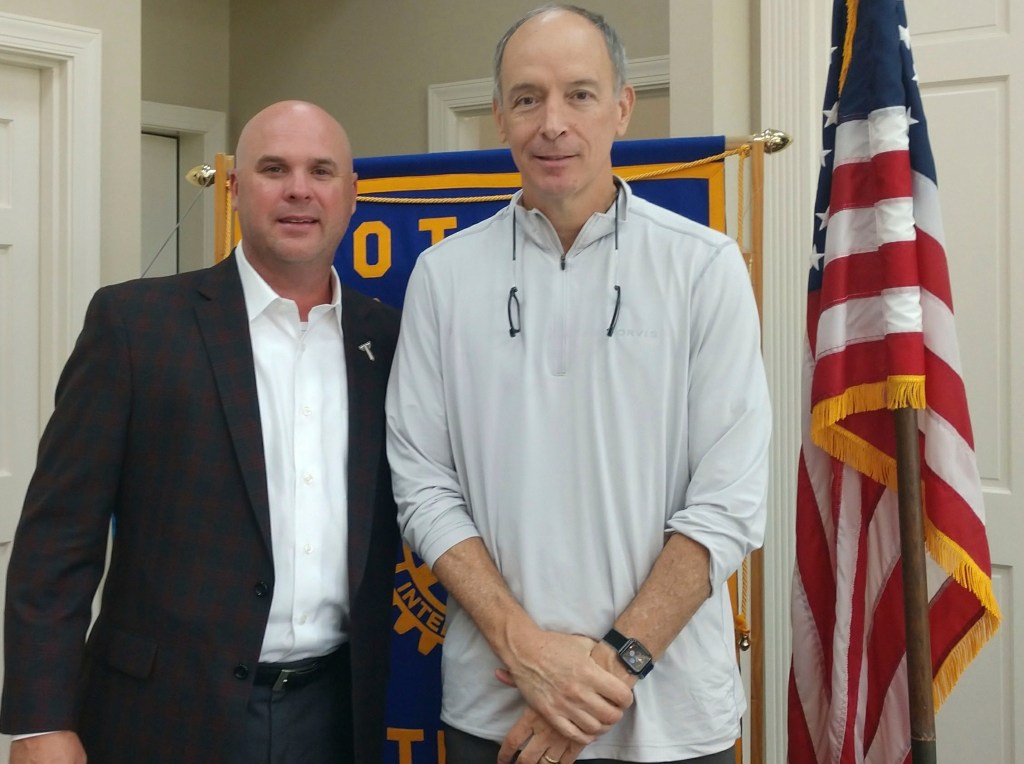 The 2021 season, team depth and the transfer portal were among the things discussed on Tuesday when Troy head football coach Chip Lindsey paid a visit to the Troy Rotary Club at the Troy Country Club.

The Troy Trojans open the 2021 season on Sept. 4 when they host Southern at Veterans Memorial Stadium. They begin preparations on Friday when they begin fall camp.

The Trojans will host six games inside Veterans Memorial Stadium this season.

“The traditional powers in our league, we get them at home this season,” Lindsey said. “We want to make sure we get the Vet packed and everybody ready to go for that. Our stadium is a hard place to win and a hard place to play when it’s full and obviously that is something that has been good for us.”

This is year three for coach Lindsey at Troy. After his second recruiting class, Lindsey feels he has the depth he has not had in his previous two seasons with the Trojans.

“We have more depth than we have ever had, especially in the offensive line and the defensive line,” Lindsey said. “I think you’ll see when you watch our team is that we will have a lot more depth than we have had in the past. We have more “TKG’s” (Troy kind of guys) than we ever had. We have guys who are really committed to doing the things on and off the field to be really good football players.”

Not only does Lindsey believe he has quality football players, but quality people as well.

“There is nothing better then getting up and going to work and enjoying the people you are working with,” Lindsey said. “These kids that we have in our program are not only good people, but they are good football players and I can’t say enough about what they have done.”

The added depth on this year’s roster is contributed to seven players accepting an extra year of eligibility due to COVID-19.

“All of them have graduated,” Lindsey said. “Those seven decided to come back; they didn’t have to. With those guys coming back we have 19 of 22 starters returning when you’re talking about both sides of the football.”

With depth comes competition. The competition taking center stage is at quarterback. Gunnar Watson returns after being named starting quarterback last season. Watson hopes to beat out newcomer Taylor Powell, who transferred in from Missouri.

“Competition is what makes people better,” Lindsey said. “I’m excited about this quarterback position. You can’t win a championship without a great quarterback. I’m excited to watch this play out this fall.”

The transfer portal has been a hot topic in collegiate athletics over the last few years. Powell was one of Troy’s transfers this offseason. Lindsey believes, that while other teams have been negatively affected by the portal, his team has benefited.

“We have been on the good end of that,” Lindsey said. “We have lost a couple guys, but I think now we have signed nine transfers and we still have one in the mix.

“It’s been a good thing for us so far. It’s still too early to tell what that’s going to look like as the future plays out. I think we have to use that as an advantage.”

Along with finding players in the portal with talent, Lindsey looks for players that fit into what the team is trying to build.

“A lot of times people are in that transfer portal for reasons you don’t know about,” Lindsey said. “You have to do your homework. One of the things we do is if we get a transfer I’m going to call the head coach and ask if there is any issue I need to know about. There are a lot of things out there that can affect that.

“We have kids entering the portal for a lot of different reasons. One is because they are not allowed to come back because an off the field issue, or they are not academically eligible, or they want to try and find playing time. There are a lot of reasons kids go into the portal. We have to do our homework and have to make sure they are the right kind of guy to fit our team.”

Name Image Likeness (NIL) is another hot topic this summer in college athletics. Every NCAA athlete can now make money through endorsements and other means beginning this year.

“I think it could be a positive,” Lindsey said. “These kids get scholarships and our university takes care of them very well, but if its another piece to encourage a kid to act right and make good decisions and do well in school, it’s like I tell my team ‘Nobody wants you to sponsor their business if you’re getting kicked off the team, or you’re making poor decisions, or they read about you in the newspaper for the wrong reason, or your not eligible to play.’

“Our compliance is doing a nice job with meeting with our guys and telling them if people reach out come to us.”