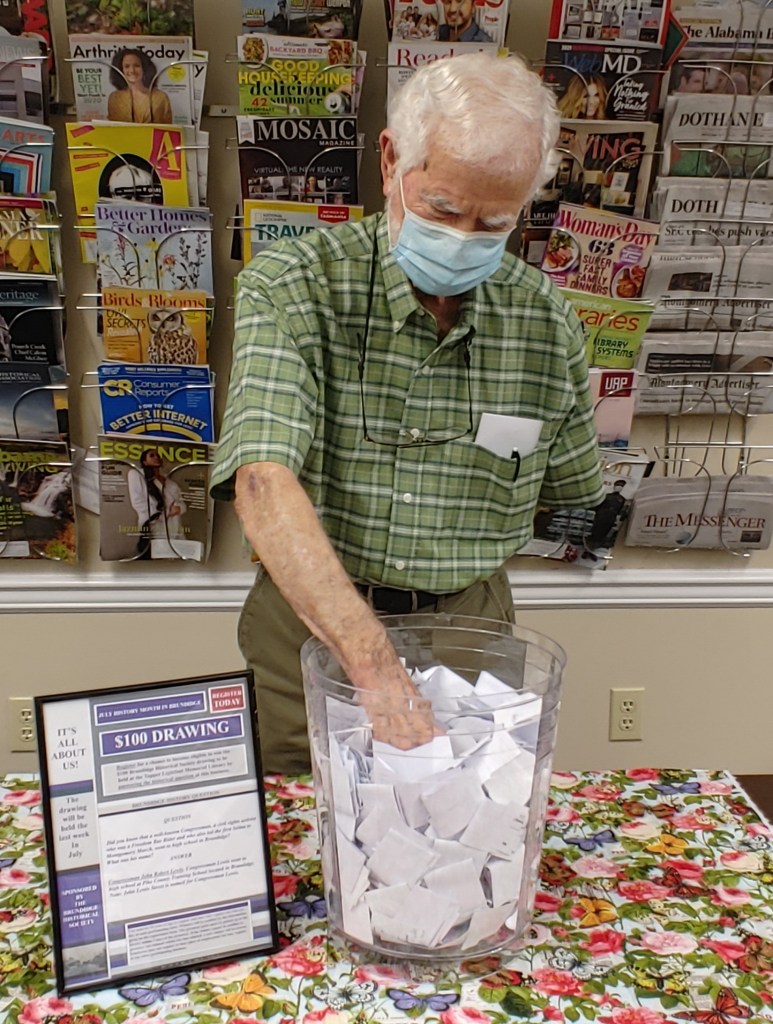 Jaine Treadwell | The Messenger On Monday afternoon, a drawing was held at the Tupper Lightfoot Memorial Library to determine the winner in the Brundidge Historical Society’s Trivia Contest, which was an event of Pike County’s 2021 Bicentennial Celebration. More than 400 entries were submitted. The winner will be contacted and awarded $100 in the historical trivia contest. Pictured is Lawrence Bowden, BHS president.

The Brundidge Historical Society has dedicated its recent efforts to research designated to the goal of having the city of 2,300 designated as a historic district by the Alabama Historical Commission.

BHS members, Lynn Sutton and Kathy Sauer, are spearheading the efforts and have recently completed a survey of business and residential areas that could potentially qualify.

In doing the research, Sutton and Sauer said they were fascinated to learn so many interesting facts about the City of Brundidge, its people and its past.

“While doing the survey, people would share these tidbits of history with us,” Sauer said. “What we learned was so interesting we wanted to share it with local residents and especially this year, 2021, the Bicentennial Celebration for Pike County.

To do so, Sutton and Sauer, began collecting these “tidbits” of history. However, they decided that keeping them in a binder would be like an old-maid collecting string and ending up with nothing more than a ball of string.

So, the decided to spread their newfound knowledge of local history throughout the community via a Brundidge trivia contest.

They enlisted the support of the local merchants and a $100 prize from the BHS and the contest began.

“We took individual trivia questions about the history of Brundidge to 26 local merchants,” Sauer said. “Customers had the opportunity to answer the trivia questions in each participating business. Their names would then be entered in the drawing for the big prize.”

Sauer said the idea was, that through the contest, the townspeople would learn more about the people, places, events and buildings in the place they call home.

“Few people know that, during World War II, there was a watch tower on top of the building that is now the We Piddle Around Theater,” Sauer said. “And, that there were cattle drives down the town’s dusty main street, that a mule barn was in mid-town and that the back street of Brundidge was called Little Wall Street.”

Sutton said hopes are that contest will be an encouragement to learn more about the history of Brundidge and share it with the Tupper Lightfoot Memorial Library so that can be preserved for future generations.