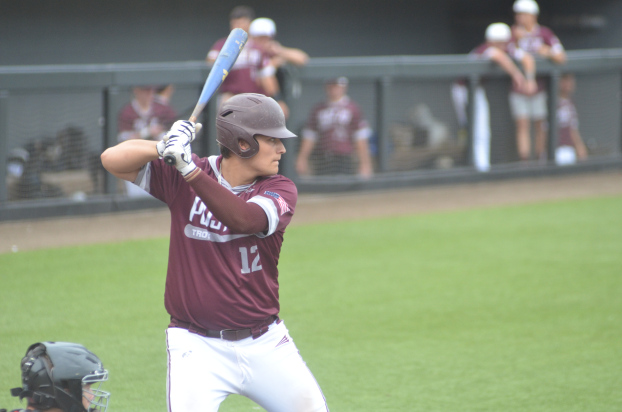 Mike Hensley | The Messenger Post 70’s Levi Sike awaits a pitch during a game this season. Post 70 begins play in the American Legion Southeast Regional Tournament next week in Pelham.

Post 70 advanced to the regional tournament last week when they took home their fifth-straight title in Huntsville. The tournament will start on Wednesday in Pelham.

“Extremely excited,” head coach Rush Hixon said. “We strive to be in the region every year. We have been fortunate enough to be in it the last five years. We need to figure out a way to get over the hump and actually win one now.”

Post 70 has been the dominant American Legion program in the state of Alabama in the last five years. They hope to expand their dominance in the southeast and advance to the American Legion World Series.

“Like any sport at any level the further you go (in a season) the tougher the competition gets,” Hixon said. “Our regional is really good. Some would argue that our region is harder than the actual world series is. That’s a good thing because you want to play good competition, but it makes it harder to get out of that region.

“We need things to bounce our way. In recent years we’ve been decent, we just haven’t gotten the breaks when we needed them.”

Post 70 will begin tournament play next Wednesday afternoon when they take on New Orleans beginning at 4:30 p.m. Other teams include Tallahassee, Columbia (TN), South Carolina champion, Tupelo (MS) Covington (GA) and Shelby County Post 555 will be the host team.

The tournament will feature a double elimination style format.

The Post 70 pitching staff enters the tournament with a team ERA of 4.12. Hixon believes pitching will make the difference in Pelham.

Hixon believes winning game one of the tournament will also be key for his team next week.

The players for Post 70 have been playing or practicing baseball since January, either at the high school level or in college. Hixon believes the energy level remains high and the fatigue hasn’t really set in yet. One thing that Hixon is concentrating on is his team’s focus during a busy time of the summer.

“The focus is what I’m worried about. Not that they’re not focused, but they have a lot on their plate,” Hixon said. “Guys are figuring out when they are returning to college and when to start fall ball in college. I have guys going back to playing high school football. There is a lot going on for these guys. It’s not an easy thing to keep them 100 percent engaged during summer ball postseason.

“The message from us is give us everything you’ve got for hopefully a couple more weeks and lets try to finish this thing out strong.”