A pen pal from yesteryear 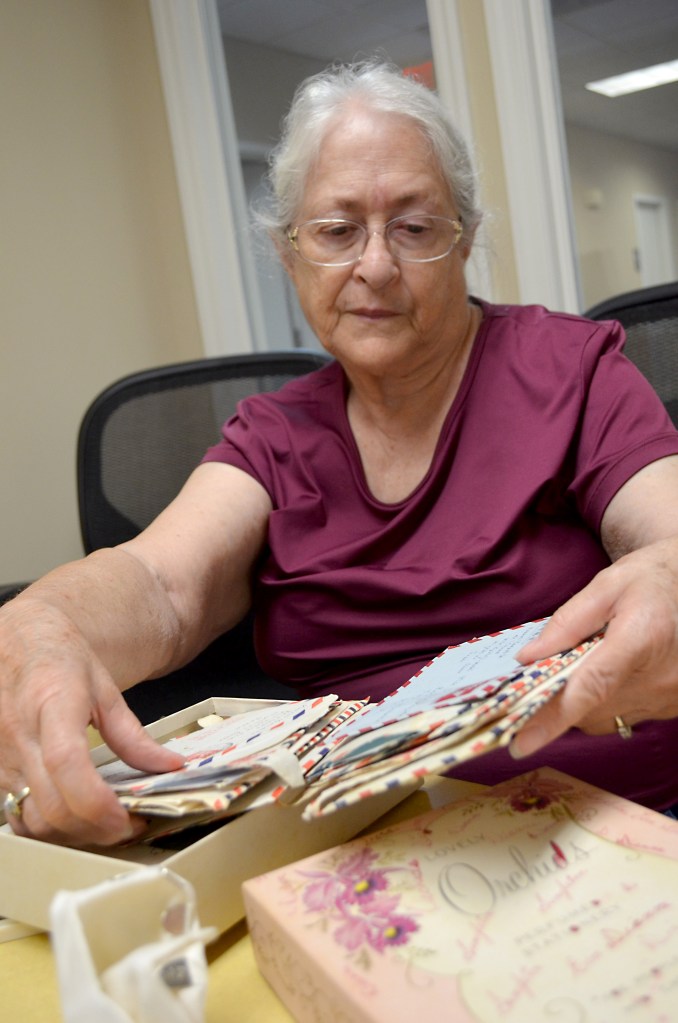 Dianne Brown (above) looks through letters she exchanged with her pen pal from Japan, Kazumi Yamashita.

Dianne Brown carefully and thoughtfully shuffled through the yellowing paper box of letters. The colored boarders identified the letters as air mail.

Brown was speaking about her pen pal, Kazumi Yamashita, of Osaka, Japan.

When she was a budding teenager, she was introduced to Kazumi through a friend who had a pen pal in Osaka.

“I thought it would be fun to have a pen pal, especially one in another country, so I asked my friend to find a pen pal for me,” Brown said. “Kazumi and I were pen pals for three years, in the mid-1960s.   We wrote letters to each other and sent cards.  It was exciting to have a friend in another country. We wrote about what we were doing in school, about the grades we were making and about things that teenage girls were interested in, like boyfriends.  Kazumi was an ice skater and she wrote about that. I didn’t know much about ice skating, though.”

Brown said once she wrote Kazumi a letter in “pretty red ink.”

“Kazumi wrote me back and asked if I was mad at her,” Brown said. “Because the ink was red, she thought I was mad. I could never be mad at her.”

The pen pals also exchanged gifts and Brown was delighted to get a necklace with Mt. Fuji and pins from places and events in Japan.

“One thing that Kazumi sent me that was very special was a silk scarf and another was a gold bracelet with charms on it and, too, some ceremonial shoes like those she wore. They were made of wood with a sock boot that had a place for your big toe.”

Brown said Kazumi wrote that her mother went to Colorado Springs, Colorado, to coach the Japanese ice skating team there.

Brown said the XVIII Olympiad was to be held in Tokyo in 1964 and Kazumi was very excited that her country would host such an important event.

“The whole world will be with us,” Kazumi wrote.

When the Winter Olympics got underway, Kazumi shared the “feel” of the games with her American pen pal.

“Kazumi sent me different things from the Olympics and it was exciting to get souvenirs from such an important world event,” Brown said. “She sent me scarves with the Olympic rings. One scarf had a smaller scarf attached so you could take it off and wear it pinned to your shirt or hat. I never took it off, though. I wanted to keep it just like she sent it to me.  The Olympic pin she sent me with the Olympic Rings was very special.”

Brown said with the Winter Olympics back in Tokyo in 2021, she has thought often about her pen pal and wondered what happened to her friend who was so special in her life during her teenage years.