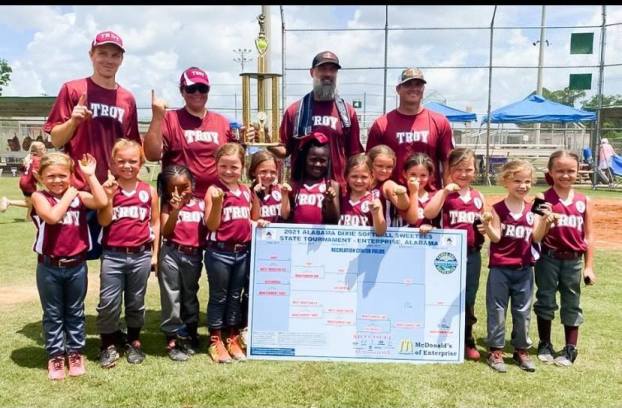 The Troy 6U Sweetees will have the opportunity to represent not only the city of Troy this weekend, but the state of Alabama as well when they travel to Alexandria, Louisiana.

After winning the state tournament earlier this month, the Troy Sweetees will have the opportunity to play in the 2021 Dixie Sweetees X-Play World Series beginning on Saturday afternoon.

“We have arrived in Louisiana and the girls are tired from the trip but excited to play,” head coach Whitney Brown said. “We will have a practice in the morning to get the girls used to the heat. We are all excited and ready to represent Troy as well as the state of Alabama”

Head coach Whitney Brown and the Troy Sweetees earned their way into the tournament after winning the state tournament in Enterprise earlier this month.

Troy will join four other teams in the four-day tournament. Two teams will represent the state of Louisiana, including host Ward 10.

Virginia and Tennessee will also make up the five-team double-elimination tournament.

Troy will match up with Tennessee in round one at 1:30. Virginia and Ward 10 will  play at noon on field 5. Louisiana will have a first round bye. The winner of Troy and Tennessee will have a bye and won’t play again until the late Sunday evening. The loser will turn around and play again on Sunday morning in an elimination game.

The tournament will crown it’s championship on Sunday. The championship game will either start at 6:15 or 7:30. If a second game is necessary it will follow the conclusion of game one.

“We hope to make it to the final day on Tuesday,” Brown said. “Thank you to everyone back home who is cheering us on and thank you to all who made this long trip out.”