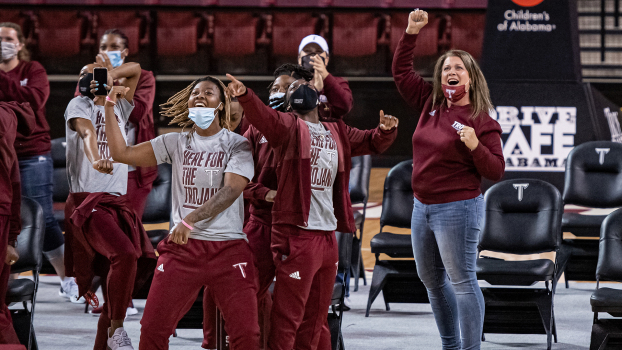 Photo/Troy Athletics The Troy Trojans celebrate after seeing their name during the NCAA Tournament Selection show in March.

For the first time since the 2021-22 season the Troy women’s basketball team will have 16 Sun Belt Conference games on their schedule.

“I’m thankful that the Sun Belt Conference has released a conference schedule,” head coach Chanda Rigby said. “I know our leaders in the conference office worked tirelessly to work out a schedule that is as fair as it can be. Troy women’s basketball plans to give 100 percent effort and is focused on winning one game at a time. “

The Trojans are coming off a 22-6 overall record and a 15-2 mark in conference play. They will have target on their back when they tip-off conference play on inside Trojan Arena on Dec. 30 against Coastal Carolina and Jan. 1 against Appalachian State.

The Trojans will then hit the road for a week and head to both Texas and Louisiana. After taking on Texas State and Texas Arlington on Jan. 6 and Jan. 8, the Trojans will finish off the road trip in Lafayette to take on Louisiana on Jan. 13.

After taking on Georgia Southern and Georgia State, the Trojans will begin a two-game series against rival South Alabama. They will begin the series at home on Feb. 5 before traveling to Mobile on Feb. 12.