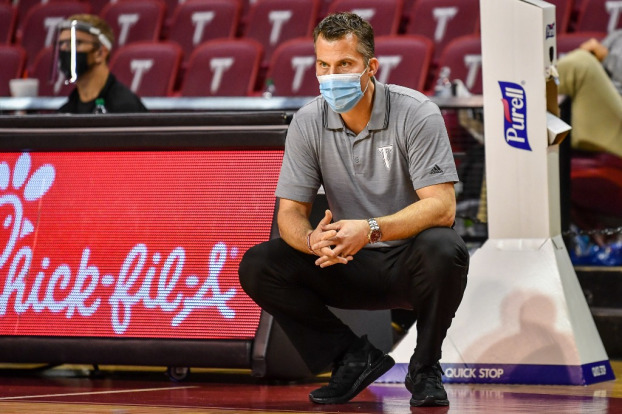 Scott Cross enters year three with the Troy Trojans men’s basketball team. On Tuesday, cross learned his team will open the 2021-2022 Sun Belt Conference schedule with a pair of games in the state of Texas.

Troy will open their conference schedule against defending champion Texas State on Dec. 30.

It will be the first of 18 conference games on Troy’s schedule this upcoming season.

“I am very excited about the 2021-22 Sun Belt Conference schedule,” coach Cross said. “I do believe the Sun Belt will be the most competitive it has ever been during my time in this league because just about every team in the league has an improved roster filled with talent. I cannot wait to get it started and look forward to competing for a Sun Belt Championship.”

After opening up against the Bobcats, the Trojans will travel to Arlington to take on UT Arlington on New Years Day.

Troy will return home for their conference home opener on Jan. 6 against Coastal Carolina. It will be the first of four straight home games for the Trojans against Appalachian State, Georgia Southern and Georgia State.

Troy will play their next three games on the road. After taking on ULM and Louisiana, Troy will head to Mobile to take on in-state rival South Alabama on Jan. 27. USA will then travel to Troy two days later to take on the Trojans on Jan. 29.

The Trojans will then alternate and play two games on the road and two games at home the rest of the season.

After playing Georgia Southern and Georgia State, the Trojans will meet up with the Arkansas schools for the their only meetings of the season. They host Arkansas State on Feb. 10 and Little Rock on Feb. 12.

Troy will hit the road to take on Appalachian State and Coastal Carolina on Feb. 17 and 19 before hosting the same two teams they opened their conference schedule against in UT Arlington and Texas State.

Following the regular season, the Trojans and the rest of the SBC will arrive in Pensacola, Florida, for the start of the Sun Belt Tournament, beginning on March 3.