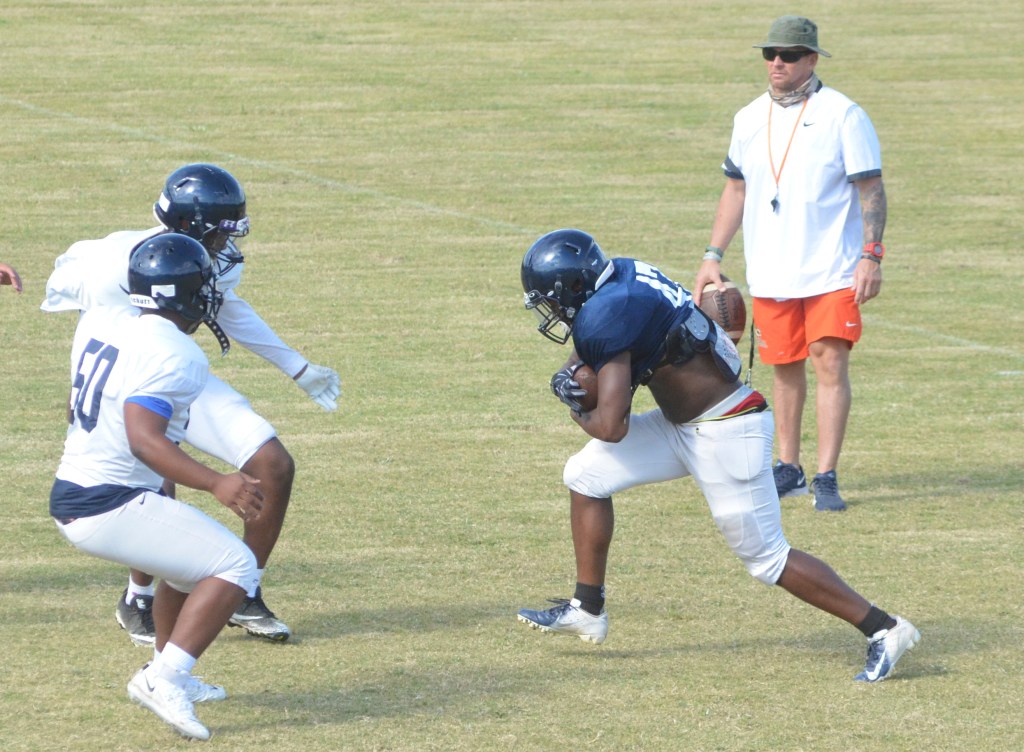 Photo/Mike Hensley The Charles Henderson Trojans have participated in numerous OTAs and 7-on-7 tournaments this summer.

Charles Henderson High School head coach Quinn Hambrite has hit the ground running during his first summer as head coach of the Trojans.

After being hired for the position in February, Hambrite had little time to prepare for spring practice. Now that he has had some time within the program, it’s full speed ahead for Hambrite as fall camp gets set to open in August.

“There is no other choice but to hit the ground running,” Hambrite said. “We’ve played a lot of competitive teams this summer.”

So far this summer the Trojans have participated in three OTAs (organized team activities) along with other teams. The Trojans first OTA was with Prattville and Sidney Lanier. They also had an OTA with Jeff Davis and Carver.

“We are playing at a higher level,” Hambrite said. “Every OTA or 7-on-7 we have been to, except for Trinity, has been against 6A and 7A schools. Even the spring game was against a 6A school. I wanted them to be exposed to a higher level of competition to see how they compete. They have done an exceptional job.”

During the OTAs the Trojans, along with the other teams, work on inside run drills, 7-on-7 drills, team drills, red zone offense and defense and two-minute drills, among others.

Each opponent this summer has given the Trojans the opportunity to go up against teams with different personalities.

“We had different personalities with each team,” Hambrite said. “I want them to be exposed against all types of personalities because every team is not going to be the same when you play on Friday nights or Thursday nights. To expose those personalities and that talent level, once we play 5A schools, we will be ready to compete and have fun.”

During their spring game the Trojans struggled to find any rhythm offensively, especially in their passing game. Since the Trojans began participating in OTAs this summer, the offensive production has increased.

“They have grown tremendously,” Hambrite said. “I knew we were going to be young. I may have two seniors starting on offense and maybe two seniors on defense. We have been scoring a lot of touchdowns in the OTAs. It’s a confidence booster for our younger guys and for me as well. To have an offensive coordinator like coach Austin, who is innovative and who adjusts to the type of players we have, I feel really good heading into the season. Our offensive is making great strides.”

The Trojans have two quarterbacks competing this spring in Parker Adams and Bo Mizell.

“We are battling it out with Bo Mizell and Parker Adams,” Hambrite said. “Both of them are sophomores. I have three years to develop a strong relationship (with them). It’s been a good battle. Both of them are throwing good balls and both of them are making strides in the right direction.”

The Trojan defense allowed 31 points per game during the 2020 season. With a defensive background, coach Hambrite is hoping to quickly turnaround the defensive unit this summer and during the regular season.

“We are still making adjustments,” Hambrite said. “We are still making mental adjustments and are still undisciplined in some areas, but we are flying to the ball and we are doing an exceptional job. People are rarely scoring in these OTAs. They are scoring, but it’s slim to none and that’s what I like to see. I like seeing zeroes on the scoreboard at the end of the game. We are taking strides in the right direction.”

The Trojans are gearing down with the start of fall camp just around the corner. They will practice a couple days next week before get back to work at full capacity in early August.

“I want them to be healthy, energetic and fresh for fall camp,” Hambrite said. “We can’t do anything this week. Next week we are going to practice two days to keep them fresh. I’m going to give them Wednesday, Thursday and Friday off, and then the following Monday we’re going to be getting after it and getting ready to go.”x