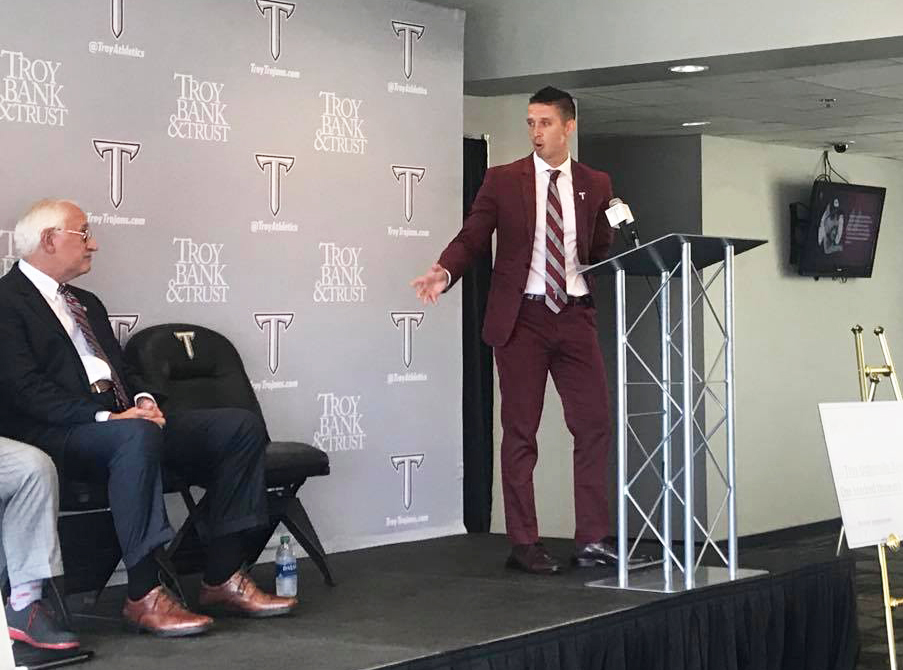 After being announced as new head coach on Wednesday, Meade was introduced inside the Trojan Club at Veterans Memorial Stadium on Thursday.

“I couldn’t be more excited to be here,” Meade said. “My wife and I have had a good time. We have only been here about 36 hours and we have been working fast and furious. Everyone in town has been outstanding.”

Meade arrives in Troy after spending the last four seasons as the University of South Carolina’s pitching coach. Prior to coaching at USC, Meade coached at Michigan State, Middle Tennessee State and Eastern Illinois.

Meade is taking over the Trojans after former coach Mark Smartt stepped aside.

Six people made up the search committee that brought Meade to Troy. Director of Athletics Brent Jones called the process intense, but was happy with the outcome.

“It was intense, thorough, extremely deliberate and very detailed,” Jones said. “This is the most challenging and deep candidate pool that we have ever had in my four years of being here. That goes to show you the passion, the foundation of Troy baseball.”

Meade initially reached out to Jones after hearing about the open head coaching position, starting the process that brought the head coach to Troy.

“My initial phone call was through Brent and I honestly was just checking the pulse and seeing if there would be interest,” Meade said. “I did my research on my own, my wife and I, the first phone call went well and the second one went better.”

During the hiring process, Meade did plenty of research of the University and the community, while also consulting with others.

“I did lean on guys that I really respect in this industry,” Meade said. “It was kept quiet, but I couldn’t find one person that said that’s not a place that isn’t ready to explode.”

Meade hopes to lead a team that is energetic and plays the game the right way.

“What I hope and will demand is that they see an energetic, clean, detailed oriented team that, I don’t mean to seem self serving, but I hope they are going to watch and say man that team is really well coached,” Meade said. “We’ll act the right way. If we throw a pitch that doesn’t go our way, you won’t know. If we make a mistake, we’ll make the next play, but we will also have the ability to make great plays. That’s what I hope they will see.”

As for his coaching style, fans can expect a passionate and energetic manager inside the third base dugout next spring.

“I won’t change the way I have coached for the last 14 years,” Meade said. “I coach with energy and I probably live and die with every pitch. I can’t change that and I won’t change that. I understand as a head coach that in the end you have to be the leader. There will be certain things I adjust, like how you manage certain aspects of the game and where you are, but in the end I’m just going to be myself.”

Troy has no intentions of inching their way into the Meade era at Troy. Meade hopes stock his roster with talent right away in hopes of putting together a solid team beginning next season.

“You have to be resourceful,” Meade said. “My plan with everything right now is fill the immediate. What is our need? What do we have to have to make this right for this upcoming year? We will worry about the future stuff. We’ll get caught up at some point, but right now, make some smart decisions that allow us to have a great roster in ’22.”

Meade is no stranger to recruiting. When he gets his recruiting started, he plans to target Alabama, Georgia and the panhandle of Florida.