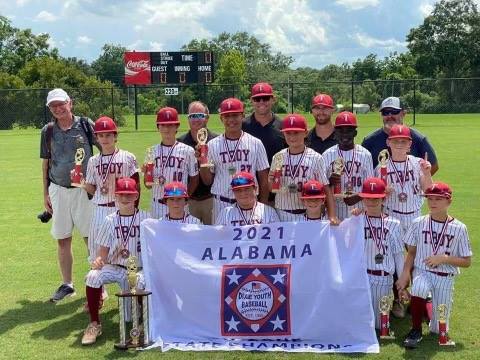 The Troy Ozone All-Stars became the third team from Troy to claim a state championship when they defeated AUM 4-2 on Tuesday.

Despite falling on Tuesday morning, Troy bounced back in the championship game to claim the state title. They now advance to the World Series in early August.

“It means a lot,” head coach Dax Pugh Said. “It’s a lot of hard work. There was a lot of work put in to get here, now we get to continue on this summer.”

Cole Garrott got the start for Troy in the championship game. He picked up all but one of the outs in his outing.

“I thought Cole Garrott really pitched a gem of a game,” Pugh said. “He threw five innings and two outs. Garrett Whitaker came in with a runner on and was able to close out the game with a strikeout. A lot of focus. We didn’t hit the ball the way we would like to, but it’s the championship game and there are a lot of nerves. We got some hits when we needed to.”

Garrott was backed by a strong defense on Tuesday afternoon, a common theme from the team all tournament long.

“The difference in the tournament was that we just pitched and played defense better than everybody else,” Pugh said. “I think with any team, it makes a difference not giving somebody free bases or free outs.”

Troy will play in the World Series in Laurel Mississippi beginning on Aug. 7. Pugh and the team are excited to once again be able to represent Troy on a grand stage. For many of the players this will be their first trip to a World Series.

“We have been able to keep this bunch of boys together for the most part since they were eight years-old,” Pugh said. “We have played in the state championship game, we have fin-ished third in the state tournament. To be able to keep them together and play not only for your town, but your state is fun. A couple of these boys have played in the World Se-ries when they were seven, now the rest of the team can enjoy it too.

Troy will take a few days off to regroup after the tournament before they ramp back up and start preparing for their trip to Mississippi.