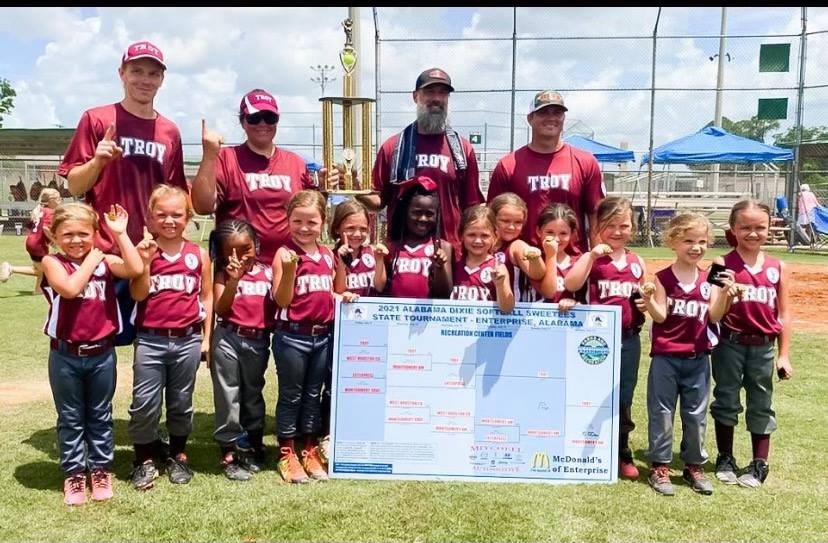 The Troy 6U softball team was having so much fun in Enterprise this weekend they didn’t want to stop playing.

They played their final game in the championship round on Monday when they defeated Montgomery American, claiming the 6U State Tournament Championship. The win sends Troy to Louisiana where they will play in the 6U World Series at the end of July.

Troy found themselves undefeated heading into the championship game. They got beat by one run on Sunday. In a winner take all contest on Monday, Troy battled back to win 12-11.

“These girls want to be there,” Brown said. “We have practiced like crazy. After losing a tough game yesterday I told my team I was taking my daughter to the batting cage in Troy and every single one of them showed up that night and practiced without me calling a practice. We hit for an hour and a half. It’s their drive and the determination. They have come so far.”

Weather played a factor all tournament long in Enterprise. Despite multiple delays, Troy was able to adjust to the wet weather.

“They took it like champs,” Brown said. “(Coach) Tom Smith was our pitcher and pitched through it. The girls, it didn’t even phase them. I think they enjoyed playing in the rain. They made adjustments when it came to gripping and throwing the ball. They did their job.”

Troy will head to Alexandria La., for the World Series, beginning on July 31.