Smartt reflects on time at Troy 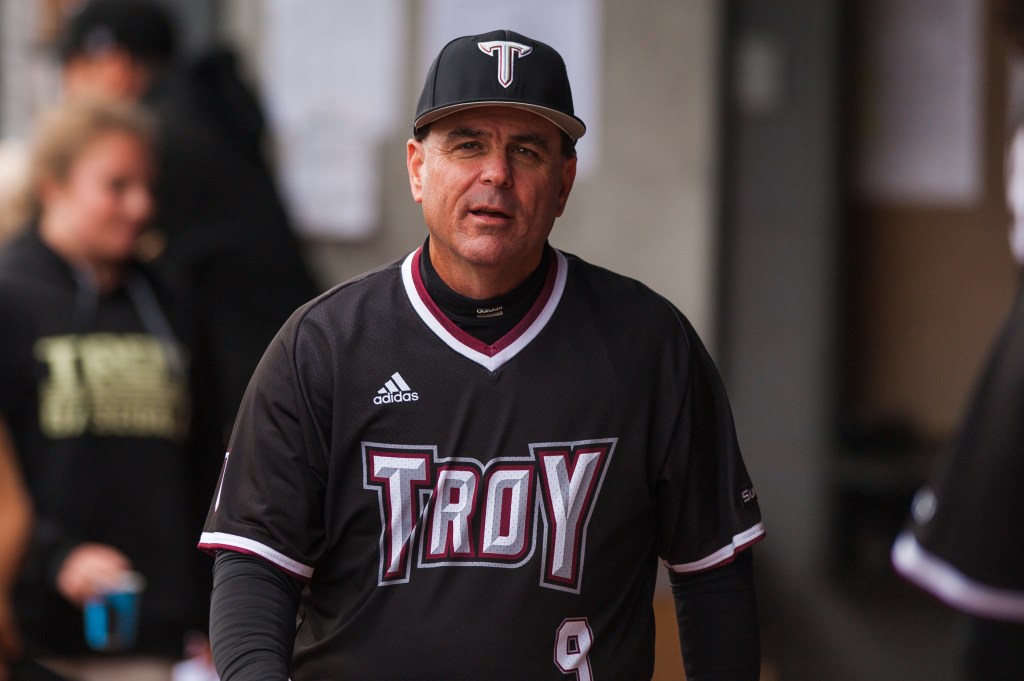 Submitted Photo/Troy Athletics | The Messenger Mark Smartt (above) spent more time in a Troy uniform than any player or coach in program history.

It’s been a little over week since the announcement was made that Mark Smartt will not be back in the dugout for the 2021 season for the Troy baseball team. Since that time Smartt has received countless calls, texts and emails congratulating him for a successful baseball career with the Trojans, including former players, coaches and fans.

“It was overwhelming,” Smartt said. “Truly heartwarming and very uplifting. It was over several days. Certainly the community here, the people of the community have been great, not only to me, but to my family. So many people have reached out to me personally to wish me well. I’m very appreciative of that.

“It confirmed to me what I thought I knew. It confirmed that my experience here has been extremely worthwhile.”

Smartt spent over 20 years wearing the Trojan uniform. After his playing days, Smartt returned to Troy and spent 19 years coaching the Trojans as both an assistant and head coach. During his tenure, Smartt had the opportunity to learn from great people in the game beginning with his former head coach Chase Riddle.

“It’s hard to quantify what coach Riddle meant to me,” Smartt said. “Outside of my father who influenced me more than any man in my life, he (Riddle) had the single best influence on me. He had an incredible ability to draw the best from you in every form. Always showing the best side of himself to others. The four years total I was around him truly helped frame for me a concept of what coaching baseball should be and how you should go about it.”

“It was impossible to do this every single scenario, but every time I put the Troy uniform on I tried to represent coach Riddle in a manner he represented himself every single time,” Smartt said. “That’s why the uniform meant so much to me. In the 23 years total that I was able to represent Troy I always strived to represent him the right way.”

Later in his career, Smartt had the opportunity to coach under a man that had similar qualities to coach Riddle in former head coach Bobby Pierce.

“I had a front row seat to Bobby Pierce for 13 years and I saw the same things,” Smartt said. “He had the same qualities, he had the same abilities, and he had the same presence and influence on the players he coached. I got to witness it all over again. When I became the head coach, every time I put the uniform on I tried to represent both him and Chase Riddle.”

Although Smartt admits these two coached helped shape his experience at Troy, there are plenty more people that had a hand in it as well.

“This whole experience has been shaped by those two men,” Smartt said. “There are a lot of other people along the way that have impacted that, players, coaches and countless others.”

During his time as either a player or a coach at Troy, Smartt wore the Trojan uniform for 1,173 games, which is the most of any Troy player or coach in school history. He was part of six conference championship teams, seven NCAA postseason teams and a pair of national championships. Despite all the success, the number one thing Smartt will remember about his time in the dugout is the relationships forged with players, coaches and fans.

“It’s always the relationships,” Smartt said. “The whole relationship process is what all us coaches appreciate and embrace. The relationship goes across the spectrum: players, other coaches, opponent coaches, fans and supporters; It influences you dramatically. Some of my closes friends today are teammates from 35 plus years ago.”

Smartt is not the only coach in his family, far from it. His wife Debbie and children Chase and Taylor Smartt are also coaches. Now that he has more time on his hands, Smartt plans to support them and be at as many of their games as possible.

“A coach’s family sacrifices a great deal,” Smartt said. “The coaching lifestyle is long days, long nights and travel. I missed a lot of things with my children. I was there when I could be, but it didn’t always match up. I need to be present and invest in their process. My wife, who basically raised two kids by herself; (I need to) invest in her path and give her the time and space she deserves. My children; be there for them a little more often. Be supportive and their number one fan. They may get tired of seeing me.”

Smartt hopes to still be around baseball in some capacity.

“I would love to stay engaged in the game of baseball,” Smartt said. “I just don’t know if I want to do it every day again. I love the game and I will always have some connection to it through my son and other coaches who I know. The fact that it’s not an every day thing kind of excites me. The stress and strain attached to coaching a team of 30 to 40 people that hang on everything you are supposed to do for them is a stressful process. I loved every minute of it, but I’m also loving not really worrying about that stress right now.”

Troy is currently searching for the new head baseball coach. Smartt believes the program will continue to be successful.

“I can say this with 100 percent faith and conviction, I want that program to succeed and accomplish more than has ever been accomplished,” Smartt said. “It’s my school and it’s my program. It means everything to me for them to have success. I hope it’s immediate, I hope it’s continual. The history of success of the program over these many years has withstood everything. It’s not one person, it’s a collective. Whomever the next coach will be, I am quite convinced it’s going to be a high level coach with a great background that can come in here and do good things right away.

“I may not be at every single game, I’m quite sure of that, but I will be there in spirit and I will always want Troy baseball to have significant success. I do believe it will happen because the program is bigger than everyone. It always has been and it always will be.”