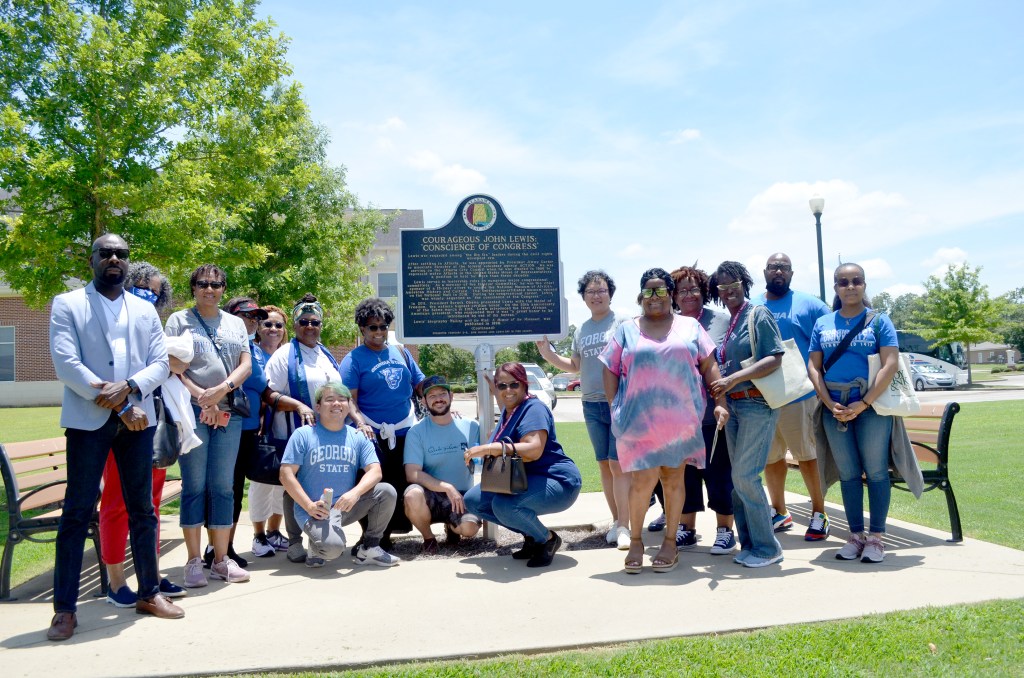 Jaine Treadwell | The Messenger Doctoral students from Georgia State University stopped in Pike County on part of a Civil Rights tour. The visited a historical marker dedicated to Pike County native, the late John Lewis, a former U.S. Congressman for Georgia. They visited with Lewis’ brother and sister, Sam Lewis and Rosie Tyner, after visiting Troy.

Doctoral students at the College of Education and Human Development, Georgia State University in Atlanta, visited Troy on June 25, as a tour stop of Alabama Civil Rights sites. The sites included the Legacy Museum in Montgomery, the Edmund Pettis Bridge in Selma and the Pike County home site of John R. Lewis, civil rights activist and leader who served in the United States House of Representatives for Georgia 5th congressional district from 1987 until his death in 2020.

The tour was led by Dr. Gertrude Tinker Sachs, chair, Department of Middle and Secondary Education, College of Education and Human Development at Georgia State University.

Prior to its stop in Troy, the tour group visited the Legacy Museum that displays the history of slavery and racism in America and followed the Troy tour with a visit to Selma and the Edmund Pettus Bridge, which is now a National Historic Landmark.

Shelia Jackson, City of Troy tourism director, said the remarks by the members of the tour group were very positive.

“They were appreciative that the City of Troy recognizes and acknowledges the important role Congressman John Lewis played in the Civil Rights movement,” Jackson said. “They enjoyed seeing where he grew up and meeting members of his family and hearing them talk so fondly of their brother who grew up in rural Alabama and went on to play such an important role in the national Civil Rights Movement.”

Jessica Hormann, doctoral student, Language and Literacy Education, said, after meeting John Lewis’ family it is no wonder his legacy is one of humanity’s highest potentials for kindness and justice.

“John Lewis’ brother and sister welcomed strangers from Georgia State University to the sister’s home,” Hormann said. “Every living thing from the cattle to the chickens to the dragonflies seeped with the love they emanate. And that, as they said, came from their parents. ‘It’s just the way we were raised.’”

Hormann said when Lewis asked in his last book, “Why do we have to be so mean?” his question came from a place of innocence.

“John Lewis did not see why we all could not simply treat each other the way his family treated me on that day, with open arms and a loving heart,” she said.

Mawusk Kamabui Pierre, doctoral student, Department of Middle and Secondary Education, said he learned that, during legal segregation, Lewis was denied a library card in Troy and entry into the Troy university because he was black. But, today, there is a placard about John Lewis outside Troy’s public library and a building named in his honor is on Troy University’s main campus.

“This means a lot to me because my mother is a professional storyteller and worked for the public library in our hometown,” Pierre said.  “As an adult, I have gotten a library card in every city and state where I have lived. Standing in front of the John Lewis placard on the grounds of the public library where he was denied access felt devastating and unbelievable. My appreciation for the freedoms he and so many have fought and won is greatly appreciated. I am the new generation of activists that fight to uphold Lewis’ victories and win many others that he did not to see within his lifetime.”