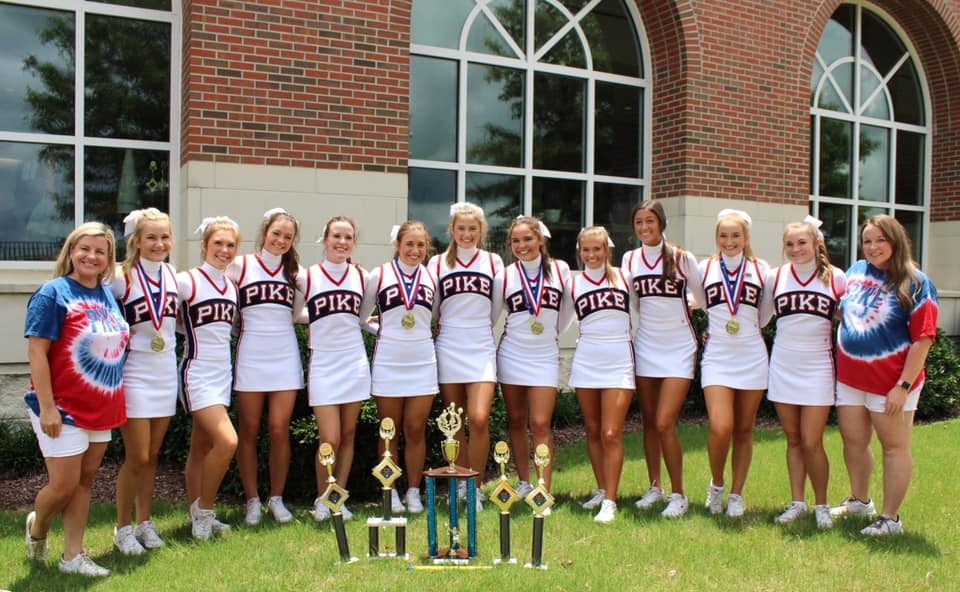 A total of 13 AISA squads showed up at Troy University’s Trojan Arena in Pike’s division in hopes of winning a championship. At the end of the day it was the Patriots who were awarded the title.

“It was a lot of fun,” varsity coach Hannah Jordan said. “We haven’t seen this much competition in the AISA for years; It’s been a long time. This year we had 13 teams in our division. AISA as a whole seems to be growing and improving, so we faced a lot more serious competition.”

The Patriots took home first place in the Camp Routine and in cheer. They finished in second place in Sideline and they were awarded Overall Gameday winner.

Allen was a jump off top five finalists for the Patriots. Kate Nelson and Ella Cate Gunter were Pin it Forward recipients.

The Patriots entered camp with a lot of experience, thanks in large part to their participation in Orlando two months ago.

“My entire squad was on a national championship team,” Jordan said. “Knowing how to work the mat in a different way is so hard to teach. Once you have done it you just know and that was a huge benefit going to camp and not having to teach them how to show spirit and teach them how to do signs. It was skills they already brought in from their competition”

It’s been a busy couple of months for coach Jordan and the Patriots. Just two months ago the Patriots won a national championship in Orlando. Since then they have been throughout tryouts, clinics and practice leading up to camp.

“We got back from Orlando and immediately started clinics,” Jordan said. “Of course it’s optional, but we didn’t have anybody miss anything. The hardest thing is that girls have had no break. Normally we have tryouts and then we take a good month of or so. When we got back from Memorial Day we had three weeks until camp and it was pedal to the metal.”

Jordan admits the one good thing that came out of not having much of a break was that the squad didn’t have time to get out of shape.

“They came right in and we just kept going,” Jordan said. “We didn’t have to fine tune things and get them back into shape because they were already there.”

Although they were still up to speed and conditioned, there was a little bit of fatigue.

“I told them how I was feeling and that I’m burned out right now,” Jordan said. “I know if I am then you are too. We kept saying push through and that if we can get through camp we will have a little bit of time.”

With the camp now in the rearview mirror, the Patriots will get some deserved time off.

“We will have a little time off now,” Jordan said. “I know they are excited. They worked for it and they absolutely deserve some time. They will be ready to get back to it when we come back in a few weeks.”