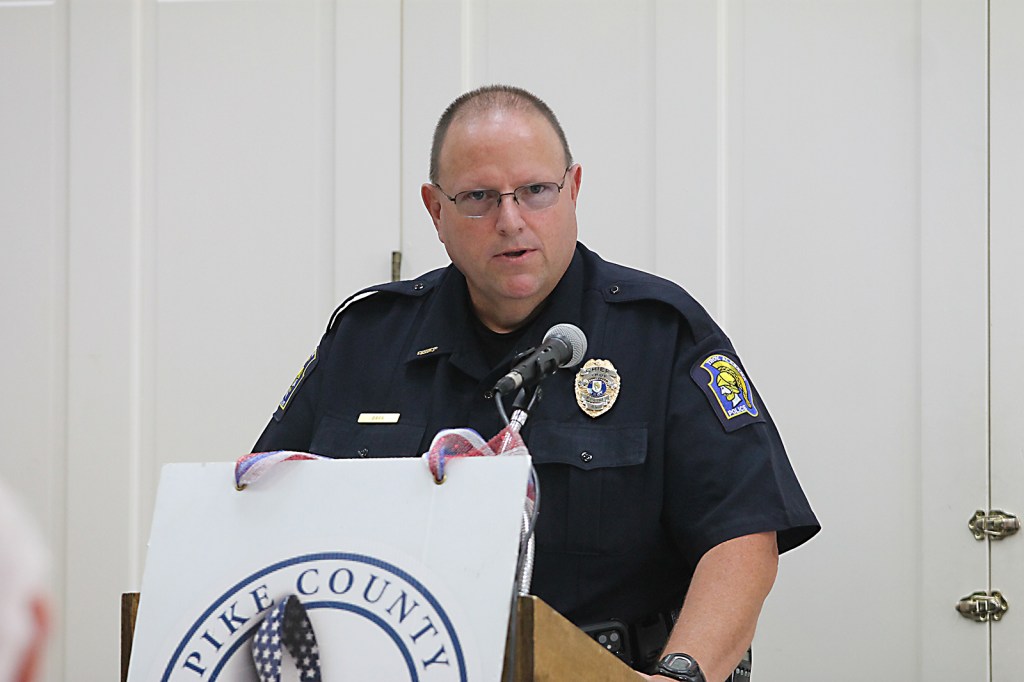 The Pike County Republican Women invited law enforcement officers to speak at the club’s May meeting, the month in which National Police Week is observed. Above: Troy Police Chief Randall Barr speaks at the meeting.

Each May, National Police Week is held and the club invited several ranking officers to speak to the club about their particular agencies.

Brooks oversees trooper operations for the 10-county southeast region of the state. He said the Troy Post currently has seven troopers assigned to it, including two female troopers.

He said for the year, the there had been 1,296 vehicle accidents in the region, including 448 injuries and 32 fatalities. He said five of those fatalities had been in Pike  County.

Brooks encouraged people to wear seatbelts, because, he said, in many cases, a lot of the people that died in car accidents would be home with their families if they had worn a seatbelt.

Barr said police departments across the nation were facing a shortage officers, including Troy. He said there were currently 52 officers int he TPD and there were 10 open slots for officers.

Barr said the department had responded to 21,335 calls for service so far this year. He said Troy currently receives all 911 calls, and some service calls were dispatched to other area agencies.

Barr said now that the COVID pandemic was lessening, the TPD would resume some of its community classes, include a womens violence defense class, a Rape Aggression Defense Class and he said the department is working on a Citizens Police Academy.

Thomas encouraged the GOP Women to support the nation’s military, law enforcement officers, farmers and teachers. He said those four jobs were vital to the nation’s prosperity.

Thomas also said the PCSO had resumed community service programs, such as the Child Identification program and would be offering Yellow Dot opportunities as well.

Johnson told the club university police officers were fully certified officers and the university department primarily made service calls for students, but the department was a full service police department. He said officer training was a priority, and the Troy University Police Department had the goal to have the best trained officers possible.