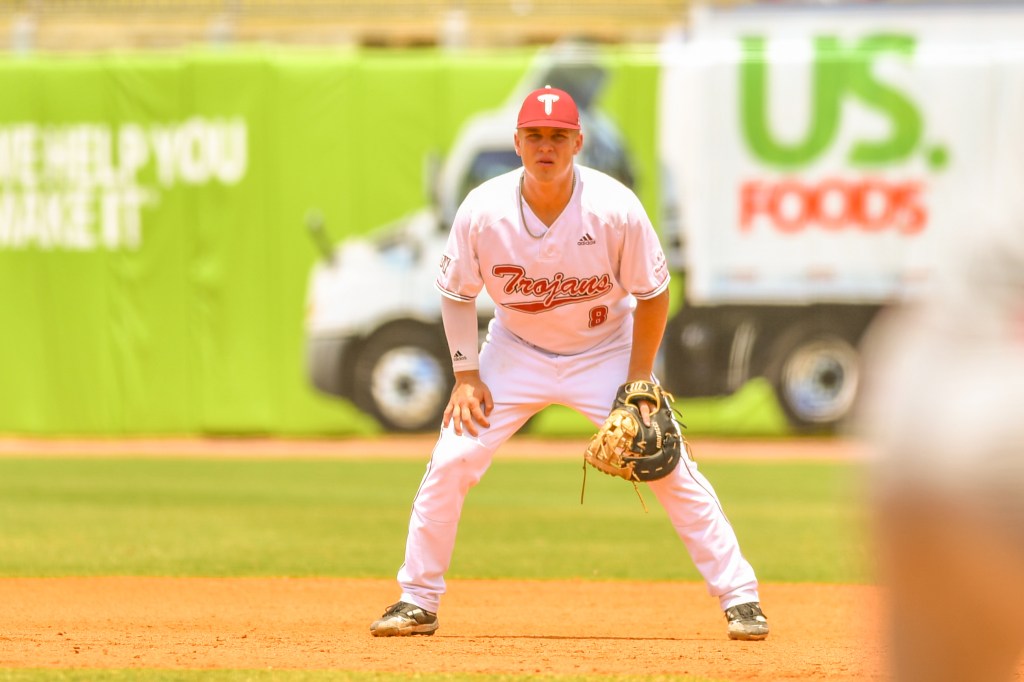 MONTGOMERY, ALABAMA - MAY 25: Game Two of the 2021 Sun Belt Conference Baseball Championships between the Troy University Trojans and Arkansas State University Red Wolves at Riverwalk Stadium on May 25, 2021 in Montgomery, Alabama.

A three-run ninth inning vaulted Arkansas State over the Troy Trojans, 9-6 on Tuesday afternoon on day one of the Sun Belt Conference Tournament in Montgomery.

The Trojans trailed 6-0 early on Tuesday before tying the score with a run in the eighth inning. With Troy’s closer on the mound, the Red Wolves rallied for three runs in the ninth inning to secure the win.

The Trojans drop to 0-1 in Pool D play. They will close out pool play on Friday when they take on Texas-Arlington. The top team from each pool advances to the semifinals on Saturday.

The Trojans elected to pitch their top three starters in their final series of the year against Louisiana last weekend.

Kyle Gamble got the start for the Trojans on Tuesday. He was one of four pitchers to throw against the Red Wolves. He pitched 1.1 innings and allowed four runs and five hits. Orlando Ortiz, Max Newton and Marquez Oates followed Gamble on the mound. Oates took the loss after he allowed three runs in the ninth on three hits and a walk.

The Trojans allowed four home runs, all of which came in the first three innings.

Five of the Red Wolves’ first six runs came off home runs, given up by both Gamble and Ortiz.

Trailing 6-0, the Trojans began to chip away with two runs in the third inning. Drew Frederic singled to right field, driving in Donovan Whibbs. Rigsby Mosley then drove in Frederic with a sacrifice fly to left field, bringing the score to 6-2.

The Trojans scored single runs in the fourth, fifth, seventh and eighth innings. With the Trojans trailing 6-3, Caleb Bartolero homered to left, bringing the score to 6-4.

The Trojans went into the eighth trailing by one after William Sullivan singled through the right side for an RBI.

The Trojans had three-straight two out singles in the eighth, including a game tying single by Bartolero to center field.

The Red Wolves had four-straight batters reach with one out in the top half of the ninth ninning. All three runs came in to score on a three-run double by Sky-Lar Culver.

Jesse Hall, Dalton Sinquefield and Bartolero all had three hits for the Trojans. Logan Cerny, Frederic and Mosley each had two hits.

First pitch against UT-Arlington on Friday is scheduled for 3 p.m. It can be seen on ESPN+.