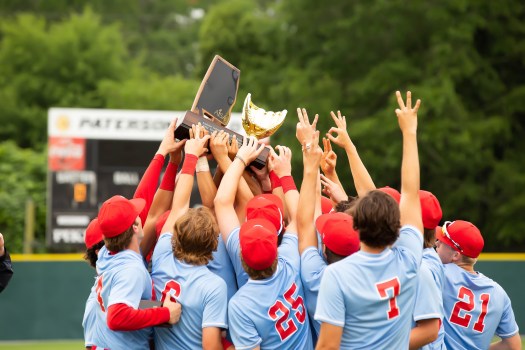 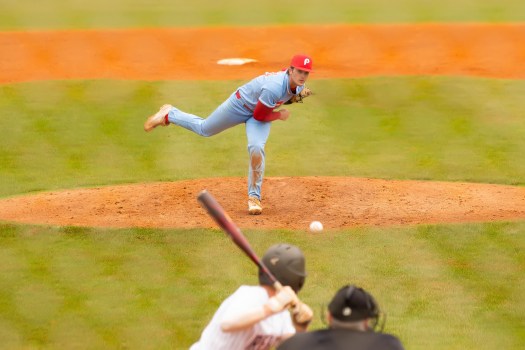 Photo/Candace Nelson Walker Stallworth delivers a pitch for the Patriots.

It’s been three days since Rush Hixon and the Pike Liberal Arts Patriots hoisted the AISA State Championship trophy and the celebration continues.

Although three days has past, the idea of being a state champion hasn’t sunk in quite yet for coach Hixon.

“It’s surreal. I don’t think it has sunk in yet,” Hixon said. “I do know it’s a good feeling, so whatever I’m feeling, it’s good.”

After a unprecedented season, seeing the team dog pile just outside the first base dugout was sight to behold for Hixon.

“Excitement is a good word and there was a little relief,” Hixon said. “I think everybody that was on the outside looking in saw the finished product, but very few people saw what goes into making these championships happen. I got to see all the work these kids put in and I got to see the people who had a helping hand with it. For me to reflect on everything it took to see that dog pile, it’s an awesome feeling.”

For many people the Patriots entered the season as the favorite to win their third consec-utive championship. After winning two in a row they were on their way to making another deep playoff run last year before COVID shut the season down. The Patriots were number one in the initial Alabama Sports Writers Association Rankings this season. They never lost that spot, but they still faced their fair share of adversities during the season.

“It wasn’t as easy at it looked Hixon said. “We had a tough schedule, and every team we played wanted to beat us. We started the year as the number one team and we never lost that spot. We lost to Bessemer in the second week of the season and these guys had to hear that we were probably overrated. Things weren’t always easy for them. There was a Sunday practice where we didn’t pick up a baseball. We did nothing but conditioning to get out effort and our mindset right. When people see championships, they see the talent, they see the kids committed, but nobody sees the kids showing up six days a week putting in the work.”

“You can’t put into words how big that was,” Hixon said. “We didn’t let Walker know he was starting until two days prior to the game. He hadn’t pitched an inning in the playoffs yet. We knew he was ready. He is extremely coachable and he is a leader. When he got out of that inning giving up only one run after the walks I knew it was going to be special. I knew he was going to go right at them and have a special outing. He is a kid who deserves it. He worked for that moment. He is a kid who, not only on the field makes a big impact, but off the field he is a leader. I couldn’t be more proud of him.”

“We felt if we could find a way to beat their number one guy, Alton Davis, in game one and turn the ball over to Drew Nelson in game two with some momentum, that is as good as we could possibly hope for,” Hixon said. “We felt extremely confident. We knew we still had to go out and execute, but we drew it up that way and ultimately it worked out exact-ly how we planned.”

The Patriot offense did their part in the success as well. Hixon credits the scouting report as well as his players’ efforts to sticking with the game plan.

Following the conclusion of game two and the trophy celebration was finished, the Patriots stuck around to celebrate with those who mattered the most, the fans.

“The winning is so much fun,” Hixon said. “The reason winning is so much fun is because a lot of times you sacrifice a lot of time and effort to buy into something bigger than you. Everybody that was celebrating with them had some hand in that championship run. There are a lot of people who deserves credit. For them to bring a championship back to the school, to the people who they look at and walk the halls with every single day was ex-tremely special.”