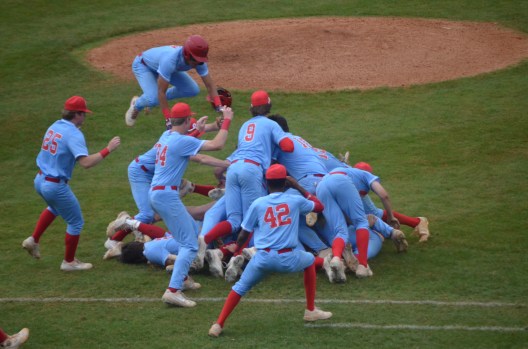 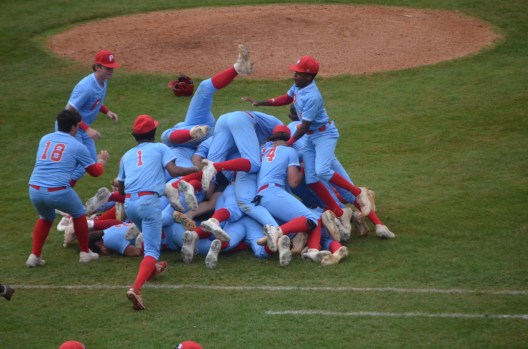 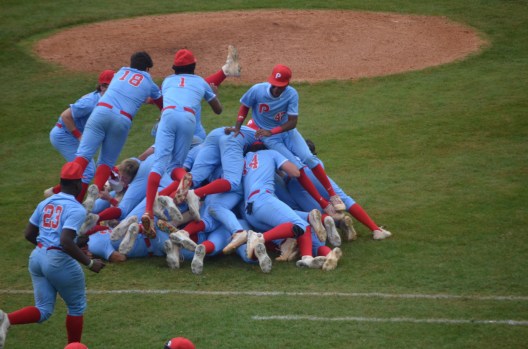 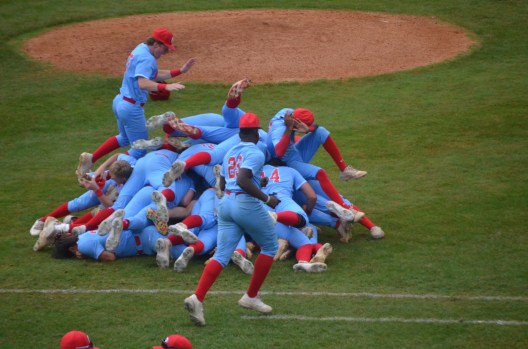 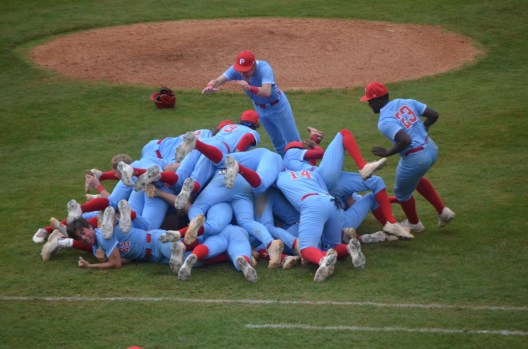 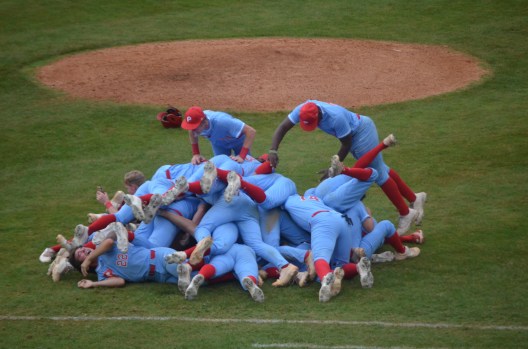 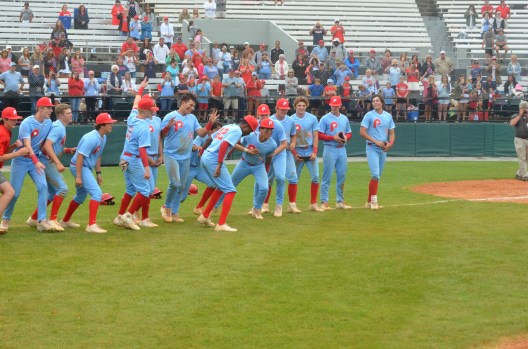 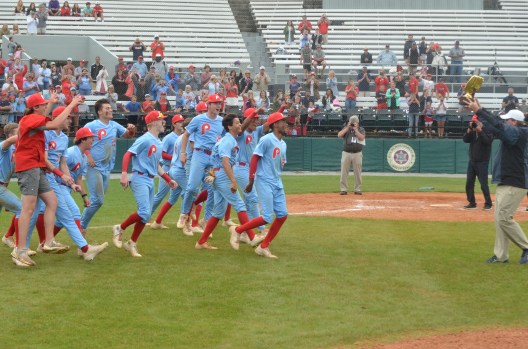 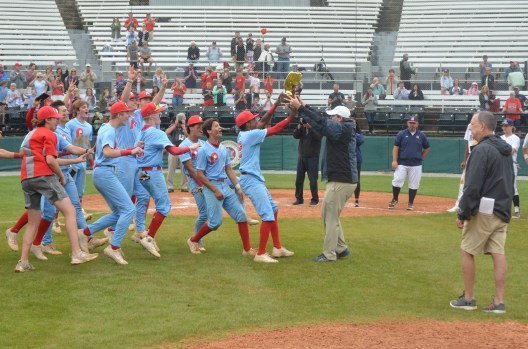 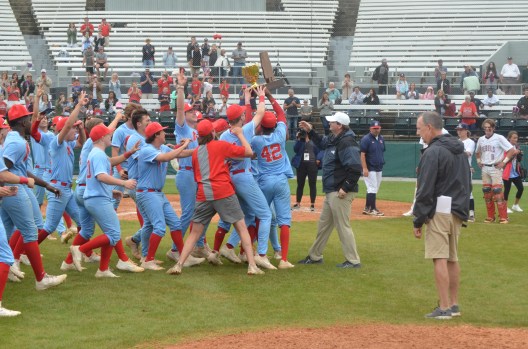 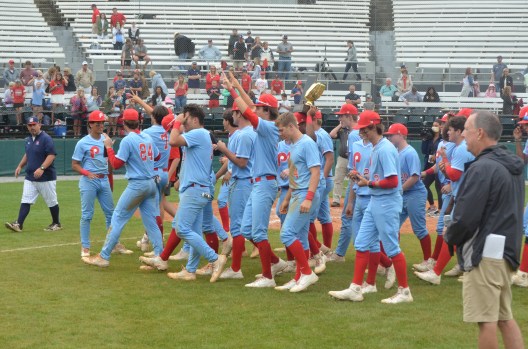 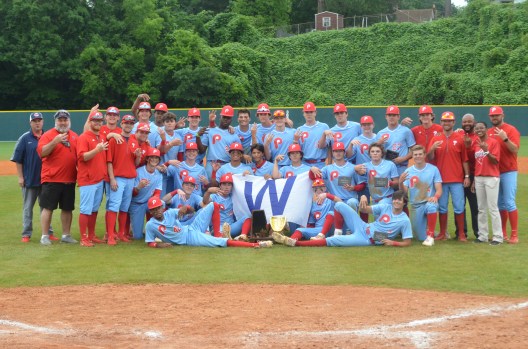 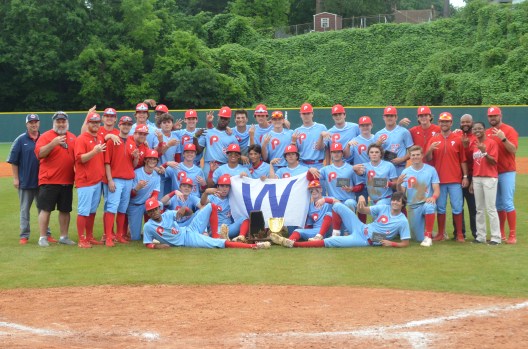 The Patriots took on Bessemer Academy at historic Paterson Field in a best of three series for the championship on Wednesday. The Patriots finished with a series sweep over the Rebels.

Despite an early deficit in game one, Walker Stallworth and the Patriots defeated the Rebels 6-2 to earn the early advantage. The Patriots scored eight runs in the second inning and cruised to an easy win over the Rebels in game two, 13-0, leading to a dogpile just outside the first base dugout.

“This team had unrealistic expectations from the start,” head coach Rush Hixon said. “Everybody thought when that group walked on the field they were going to win just because of the letter on their chest. That group bought into the work, bought into each other and it wasn’t easy. They stayed the course and bought into what we were doing and I couldn’t be prouder of them.”

The Patriots scored three runs in the third inning and scored two more insurance runs in the seventh in their four-run win in game one.

Stallworth, after a shaky first inning, pitched 6.2 innings for the Patriots. He allowed two total runs, one earned run and three hits. He finished with 10 strikeouts.

Stallworth walked four hitters in the first inning. After a Patriot error; the Rebels scored the first run of the game and took an early lead.

A Bessemer error lead to the Patriots tying the game in the second inning. After a Skylar Kidd walk, Bessemer pitcher Alton Davis balked Kidd into scoring position. Stallworth reached safely on an error that led to Kidd scoring the tying run.

The Rebels committed two more errors in Pike’s three-run third inning. After the first error of the inning, Scott Taylor Renfroe singled to center, driving in a Pike run. Three batters later the Patriots scored two runs, thanks to errant throw to first base on a double play attempt, giving the Patriots a 4-1 lead.

Following the first inning, Stallworth had four straight shutout innings. He allowed three hits the rest of the way.

“We didn’t know he was pitching until two days ago,” Hixon said. “I asked him if he wanted the ball and he said ‘I have the ball.’ He didn’t let me down. He is a competitor, he is a leader and a good kid. He deserves every bit of what he got out there.”

After Bessemer got a run back in the sixth, the Patriots answered with two more in the seventh. A Bessemer error and a walk led to a two-run single by Kidd, bringing the score to 6-2.

The Rebels loaded the bases with two outs in the seventh. Press Jefcoat picked up a strikeout to end the threat and the game.

The Patriots led the Rebels 13-0 in the third inning of game two. The game was called after AISA officials confirmed with the umpiring crew that there was a 12-run rule after three innings of play.

Drew Nelson got the start for the Patriots in game two. Nelson kept the Rebels hitless in three innings. He walked three batters and had five strikeouts.

“Drew works harder than anybody I know,” Hixon said. “He is at the field five days a week. When we won the first game, I told him take the ball and let’s go win the series.”

The Patriots scored their first two runs in the bottom of the first inning. Nelson had an RBI groundout and Kidd drove in the second run with a single to left field.

The Patriots sent 13 batters to the plate in their eight run second inning. The Patriots tallied five hits in the inning including two doubles and a two-run triple by Jayden Jordon.

Hunter Keenan, Stallworth and John Lott all had an RBI in the inning before the game was called.

Jordon and Lott each finished with two hits and a total of four RB. For the Patriots.