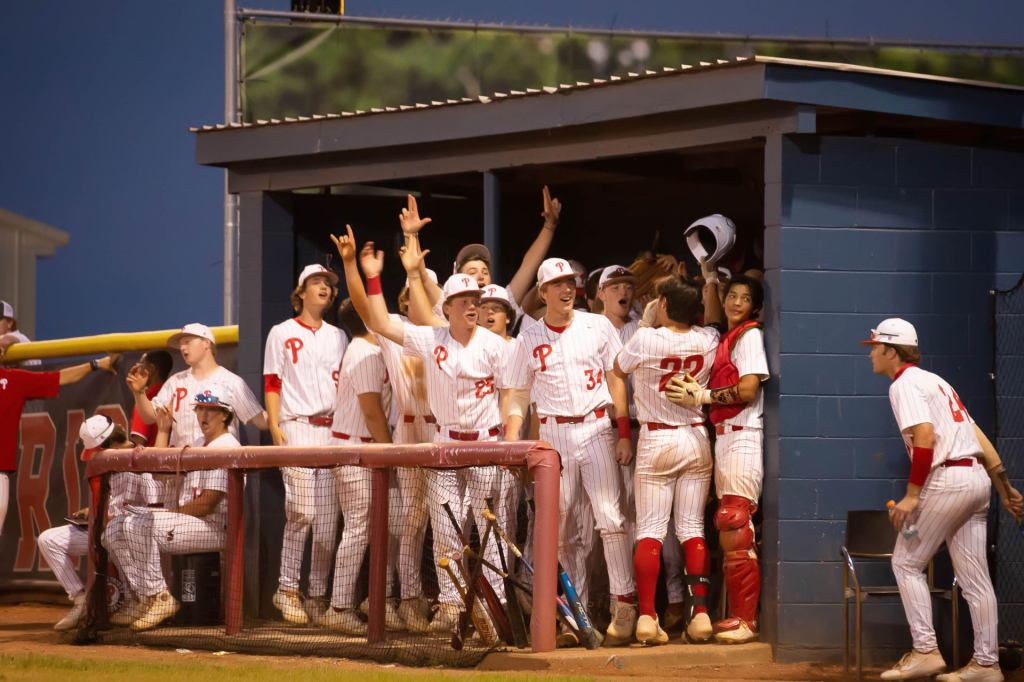 Candace Nelson | The Messenger Patriots celebrate during a game against Tuscaloosa Academy.

Mayes White scooped up a ground ball and threw it to first base for the final out on Wednesday, sending the Pike Liberal Arts Patriots back to the state championship in Montgomery.

The Patriots swept Morgan Academy last Wednesday in the Class 3A semifinals giving them an opportunity to play for their third straight state championship next Wednesday at Paterson Field in Montgomery.

“The trip to Selma was good because we came back with two wins,” head coach Rush Hixon said. “It wasn’t easy. Credit to Morgan, they came out and played hard and gave us a really good game. We had to scratch and claw to get out of there with two wins. We are fortunate to still be playing this late into May.”

“He is playing at an extremely high level right now,” Hixon said. “He is fun to watch when he is doing that. He is very talented and I think he plays his best baseball at the most important times. He has been a different guy in the playoffs for us. It’s no surprise to us because we know what he is capable of, but to see him go out and do it in the first two rounds of the playoffs is really fun to watch.”

The Patriot offense picked up timely hits for the Patriots all series long. It’s been a common trend throughout the postseason. Senior Levi Sikes has totaled four hits this postseason including a timely home run. He has eight RBI in the postseason, including five in game one of Pike’s series against Tuscaloosa Academy last week. Hixon singled Sikes out for being a guy who can come through with a clutch hit when needed.

“One guy in particular is Levi Sikes,” Hixon said. “In game against TA he has five RBI in a game where we scored six runs. He had some big at-bats that kind of propelled us. Same thing happened against Morgan in a tie game, he drives in two runs. He has been huge for us. Ultimately we haven’t hit the ball extremely well, but we have found ways to score.”

The Patriots will be matching up against Bessemer, who swept perennial power Glenwood on Thursday by scores of 10-9 and 15-0. The Patriots have played the Rebels three times in a tournament setting and went 2-1 against them.

“Bessemer is extremely talented,” Hixon said. “They play extremely hard and they have some good arms. They have a left handed pitcher that is committed to Alabama. He has an upper 80’s, low 90’s arm from the left side. They have some good bats in the lineup. I feel like they are as good of a hitting team as we have in this league. It’s going to be a big challenge for us.”

Game one is scheduled for Wednesday morning at 10 a.m. Game two will follow shortly after game one’s conclusion. If a third game is needed it will be played on Thursday beginning at 11 a.m.