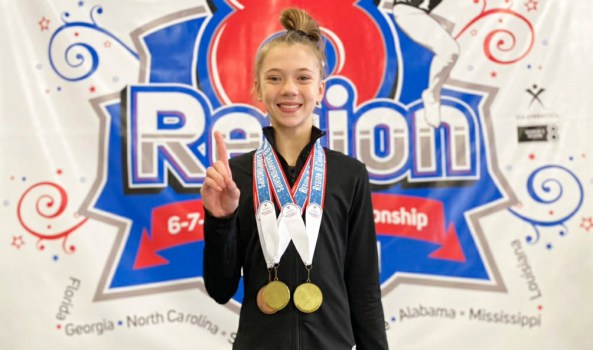 Submitted photo | The Messenger Eden Bruner poses with her medals after competing at regionals in Montgomery. 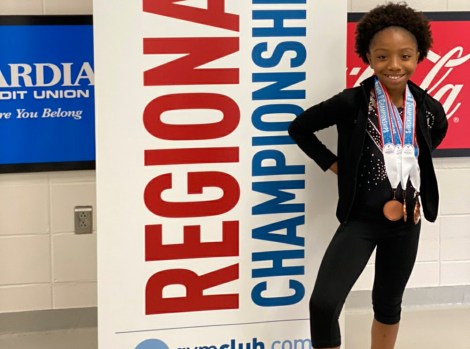 Submitted photo | The Messenger Skylar Wright poses with her medals after competing at regionals in Montgomery.

Skylar Wright and Eden Bruner both were in Montgomery and had strong showings.

Skylar competed in her first regional championships in Montgomery. At nine years old she competed in level 7.

Bruner finished in first place in beam and floor. Her 9.825 score in the floor competition was the second highest of all Level 7’s, the highest in her session and among the top 100 in the country.

“This was Eden’s third time advancing to a regional qualifier, but only her second time competing,” Diaz said. “Eden put on a show. She won beam and floor and had the second highest score of both sessions. Her floor score was top-100 for that week. Her second time competing at regionals and she is a regional beam and regional floor champion. That is huge for her and big for our gym and it’s big for the state of Alabama as well to produce some kids that are winning events at regionals.”

Diaz believes Bruden’s high score in floor proves that she is capable of competing with anyone at a high level.

“I think it’s huge for her to have that next to her name from here on out,” Diaz said. “Her floor score showed that she was one of the top 100 girls in the nation during that time. I think it shows that she has the ability to be at that level moving forward. It’s huge for her and it’s huge for our gym. It’s a testament of the hard work that she has put in to get to this point.”

The work leading up to regionals was never ending for the gymnasts at Xtreme Athletics. With the championships being held in Montgomery, the hope was Xtreme Athletics would have as many participants as possible.

“The work up to this point has been continuous,” Diaz said. “We prepared them up to state hoping to qualify as many as we could for regionals. Being that it was hosted here in our state, we wanted to put as many of our girls from Xtreme Athletics in that competition as possible.”

Qualifying for the Regionals allowed both Wright and Bruner the opportunity to show others how good they are and coach Diaz believes they did that.

“With them qualifying, it put a little more pressure on them to prove just how good they are,” Diaz said. “I feel like they did that.”

With regionals behind them, Diaz and the gymnasts immediately got back to work, working on level 8 skills.

“We are preparing for level 8 and hopefully preparing them for level nine by January,” Diaz said. “That’s the goal. We came in Monday and Tuesday and did nothing but level 8 skills. We cleaned up our basics. Maybe where we lost a few tenths here and there on some form issues or dance issues.”