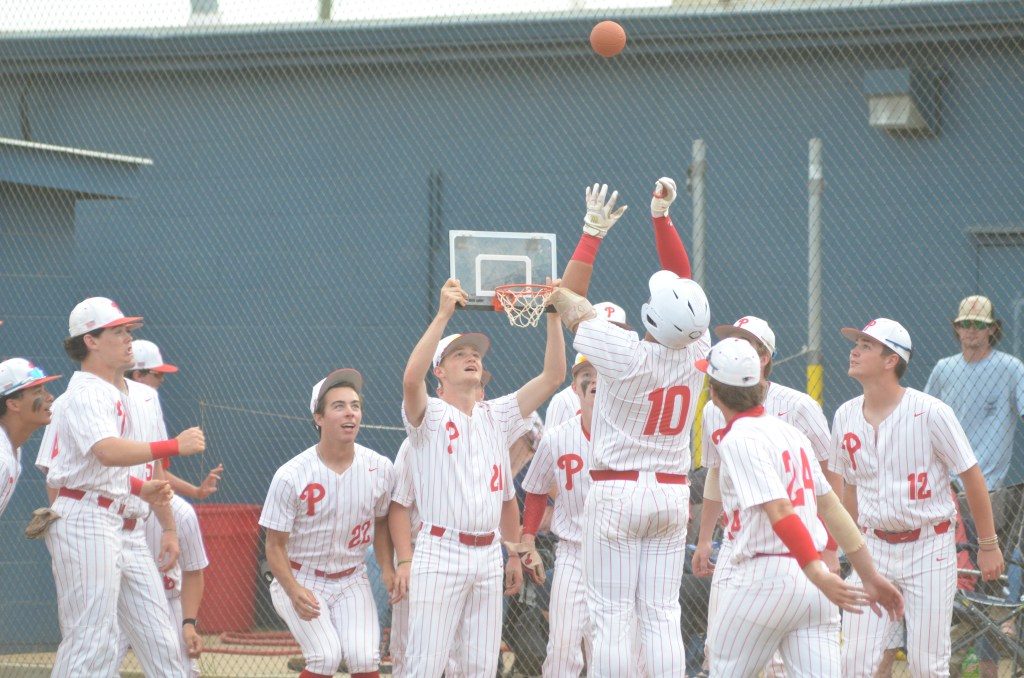 Levi Sikes celebrates with his teammates after hitting a home run on Thursday. Sikes finished with five RBI in game one and drove in what turned to be the winning run in the sixth inning.

The Pike Liberal Arts Patriots began the second round of the AISA State Baseball Playoffs against Tuscaloosa Academy on Thursday afternoon in Troy.

The Patriots had a two-run sixth inning in game one, giving them their first lead of the contest. A lead they would hold on to in a 6-5 win. Drew Nelson and the Patriots had no trouble in game two, defeating the Knights 9-1 to advance to the AAA AISA state semifinals.

The Patriots entered the bottom of the sixth inning in game one trailing 5-4. John Lott began the threat when he jogged to first after being hit by a pitch. After a Mayes White fly out, Nelson reached safely on an error by the Knight second baseman. Both Lott and Nelson came across to score the trying and leading runs on a double by Levi Sikes. It was one of two extra base hits by Sikes in the game. Sikes finished with three hits, five RBI and one run scored.

Javon Christian got the start for the Patriots in game one. The senior pitched 3.1 innings and allowed five total runs, four earned runs and four hits.

The Knights jumped out to an early 3-0 lead in the third inning of game one. The inning started when the Knights had their leadoff batter reach thanks to a dropped third strike. Two batters later the Knights got on the board with a two run home run over the wall in left field.

After a walk put a Knight batter at first, TA picked up their third run of the inning on a double to center.

Jade Sikes got a run back leading off the bottom of the third inning when he homered near the same location as the one in the top half of the inning. With two runners on, Walker Stallworth singled to right allowing Scott Taylor Renfroe to score. The Patriots had two runners thrown out on the base paths and went into the fourth trailing 3-2.

A TA double helped set up a two-run inning for the Knights in the top of the fourth inning, giving them a 5-2 lead.

The Patriots had their second consecutive two-run inning in the bottom of the fourth inning to pull back to within one at 5-4.

Lott doubled to begin the inning. Following a White walk, both runners came across to score on a single by Sikes, bringing the score to 5-4.

Following Pike’s two-run inning in the bottom of the sixth, Press Jefcoat finished the game with a 1-2-3 inning including two strikeouts to secure a game one win.

Nelson pitched all seven innings of game two. He allowed one run, one hit and finished with 16 strikeouts.

The Patriots led 3-1 head into the fifth inning. They gained a little more breathing room with a two-run fifth. Nelson had an RBI single and Scott Taylor Renfroe had an RBI on a fielder’s choice, bringing the score to 5-1.

The Patriots blew the game open with a four-run seventh inning.

The Patriots scored on an error, a passed ball and double by Jayden Jordan.

Nelson finished the game 3-4 with three RBI and a run scored.