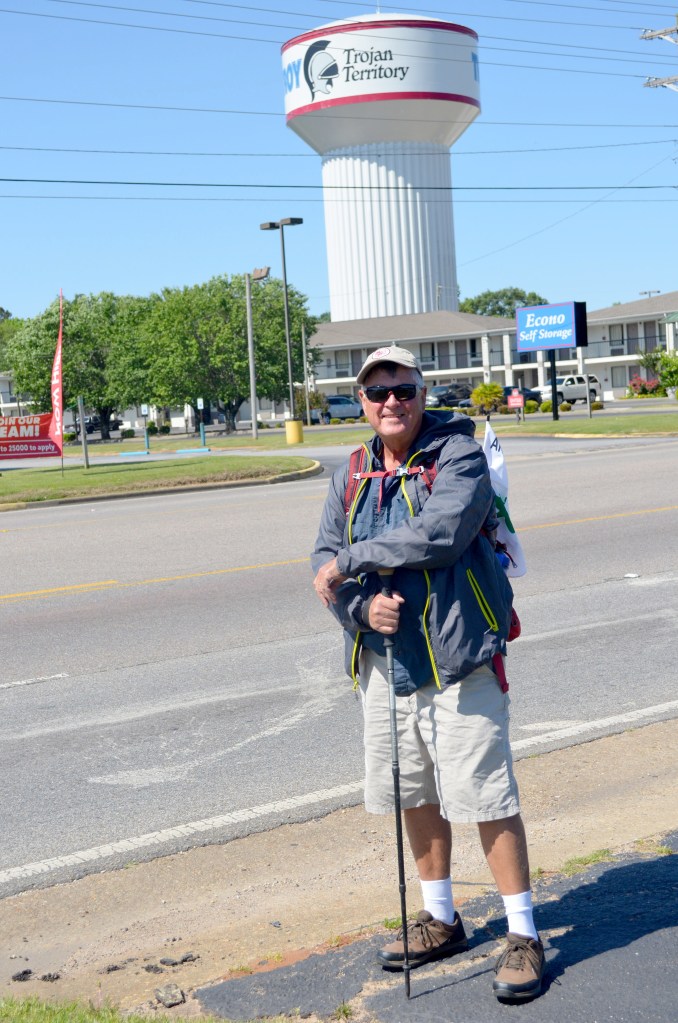 Jaine Treadwell | The Messenger Pastor John Halvorsen is on a 3,500-mile Prayer Walk Across America from Miami to Seattle. His hopes are that others will be inspired to walk with God and his prayer is for an awakening to sweep through America. Halvorsen walked through Pike County on Wednesday and Thursday on his Prayer Walk Across America. He walks 16 miles a day and, if all goes well, he should walk into Seattle, Washington around Thanksgiving. Find them on Facebook and at PrayerWalkAmerica.com.

“That guy’s gotta be nuts!”

The man shook his head as he watched John Halvorsen make his way through heavy traffic on U.S. 231 in Troy. “Gotta be!”

But Pastor John Halvorsen is no stranger to heavy traffic. After all, he has three treks across America to his credit and was on day 77 of his fourth Walk Across America when he took a short break in Troy.

Halvorsen relaxed inside the R.V. that is home for him and his wife, Sandy, on his walks across America.

“We started in Miami and we’ll end in Seattle, hopefully, around Thanksgiving,” Halvorsen said, and answered without question. “That’s 3,500 miles.”

At any age, to embark on such an incredibly journey would be remarkable, but at age 70? Why?

Halvorsen didn’t hesitate. Back in 1998, the Lord spoke to him, actually shook him awake to the turbulent times ahead for America.

As a pastor in Duluth, Minnesota, and also a missionary, Halvorsen often heard God speak to him, but to be so bodily shaken was a different awakening to God’s plan for him. He could not stop trembling.

“This was back during the Clinton era, but God’s message was of coming turbulent times and the need for the blessings for our nation,” Halvorsen said.

Halvorsen and his wife embarked on the journey God had planned for him. From Minnesota to the Gulf of Mexico, his message resounded among the people and even received positive press.

A year later, the Halvorsens were again on a journey across America from Oregon to Delaware carrying with them the need for an awakening in America, for God’s people to cry out for mercy.

John Halvorsen carried the message that America was facing turbulent times and that all Americans needed to turn toward God as the anchor in the impending storm.

Over the next years, Pastor Halvorsen continued to pray for all America and to inspire others to walk with God. Then, in 2018, Halvorsen was once again called by God to walk across America with the message of God’s love and the encouragement to stand strong in His ways.

On Halvorsen’s third Walk Across America, from Los Angeles to New York, he witnessed the desire among people for God’s leadership and guidance in their lives. Halvorsen carried with him the message of God’s love and His desire for the redemption of His people. “Johnny Walker” had done God’s will for him.

But, once again, Halvorsen was visibly shaken by God’s will. However, he was not sure what God was telling him. He was 70 years old. What was he thinking? Surely, it was not God’s plan for him to walk across America again. From Miami to Seattle?

That was not Halvorsen’s desire. But, was it God’s will for him?

“God gave me thumbs up,” Halvorsen said, with a smile. “I had no doubts what I was called to do.”

Not even when Havlorsen contracted COVID-19 early in the walk, did he doubt God’s plan for him. So, in faith, he took the first step on a 3,500-mile prayer journey.

John Halvorsen’s Prayer Walk America from Miami to Seattle is an “Appeal to Heaven” for God’s mercy on America and His grace on her people.