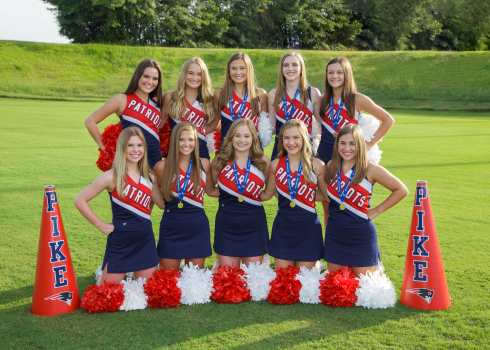 Both squads will hit the road on Wednesday with competition beginning on Friday.

“It’s exciting because it’s the first time we have done this in 15 years, and the first time for JV,” coach Katie Scott said. “They are pumped and ready to go.”

Both the Patriot varsity and junior varsity squads qualified for this event at regionals late last year.

“We went to regionals the day after the football team played in the state championship,” Scott said. “We have had an extra long year of practicing and practicing. They have worked hard and long and deserve to go to Orlando and have a good time and see what they can do.”

The delayed competition has pushed the season into softball seaoson and although a few cheerleaders also play softball, there has not been much conflict. The biggest obstacle for the Patriots has been the extra practice time.

“It’s a long practice time,” Scott said. “We have had a few injuries, but we have been able to get people back into the routines. Overall the work ethic has been great. They always work hard. I can’t tell you a day they don’t come in and give me exactly what I ask for and when I ask it.”

The competition will be held at different arenas at the Wide World of Sports at Walt Disney World. The Patriots will get a little practice time in on Thursday before starting the competition on Friday. The varsity will have two different routines, a traditional routine and a game day routine. The junior varsity cheerleaders do the game day routine as well.

The last time the Patriots were in this situation was 15 years ago under coach Scott, who believes it will look different this time around.

“There is a little unknown,” Scott said “Several of the girls have done All-Star cheer. It’s the same, but different. I would assume it will look different than it did 15 years ago. We are prepared. We practiced the warmups. It’s going to be large, obviously a lot different than the norm, due to COVID.”

The goal for Scott and the Patriots is to bring home a national championship, but more importantly they want to make sure they leave everything they have in Orlando and know they did their best.