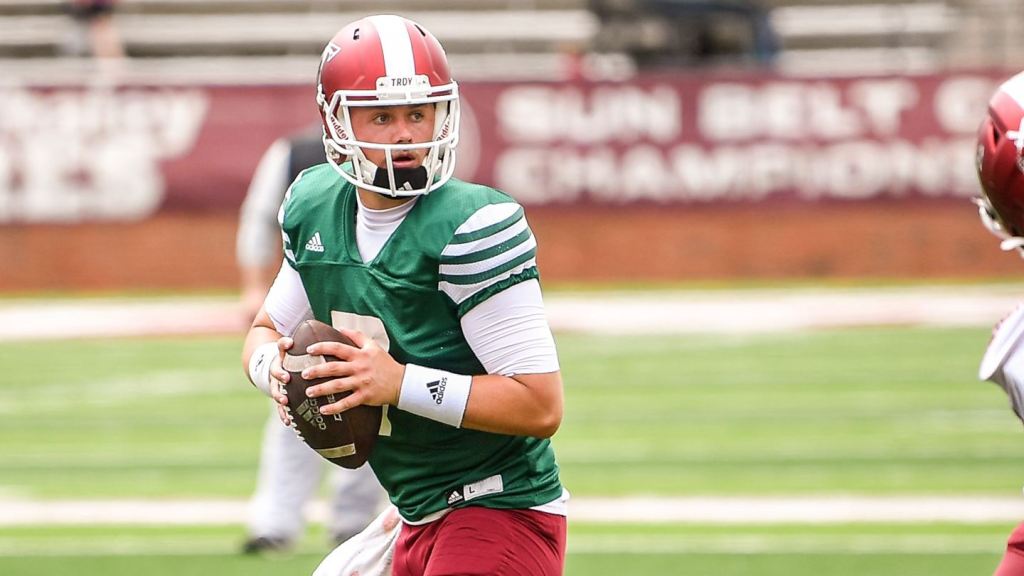 Troy Athletics | The Messenger Troy quarterback Taylor Powell looks for an open receiver during a scrimmage this spring.

The Troy quarterbacks continued to make Chip Lindsey’s job of naming a starting quarterback a difficult one with a strong showing during T-Day on Saturday.

All three quarterbacks currently vying for the starting quarterback role this summer and fall not only got meaningful reps on Saturday, but also carried over their strong play from spring practice.

Gunnar Watson, Taylor Powell and Jacob Free all threw touchdowns in what turned out to be a 21-7 win for team Cardinal over team White on Saturday.

“Offensively I thought we had some pretty good drives,” Lindsey said. “All three quarterbacks threw a touchdown which was great, so that was great. We had the one turnover, which was probably forced a little bit. I was Really pleased with how they moved around and completed balls. They didn’t put the ball in jeopardy much at all, which is a big deal.”

“All three quarterbacks did some good things out there today,” Watson said. “I thought I did pretty well out there. I had a few things I’d like to take back, but overall, we played fairly well.”

The quarterbacks moved around in the pocket while being pressured on Saturday. On multiple occasions the quarterbacks were able to find a running back or tight end for a short, quick completion.

“We checked it down to our backs when we needed to,” Lindsey said. “I was really pleased with how our quarterbacks moved around in the pocket. We aren’t going to hit the quarterback on defense, so I think it probably would have affected them more in a live game, but at the same time guys that can adlib a little bit and extend plays and keep their eyes down field, it’s going to help us win.”

Last week Lindsey said the decision would not be made solely based on their performances on Saturday. After Saturday, the competition for the starting role continues to be close.

“The last three or four practices there hasn’t been much separation between any of the quarterbacks,” Lindsey said. “They all have ability and all three have played in college which we feel good about. The guy that takes care of the ball the best and affects the team the best will win the job. There’s nothing better than competition.”