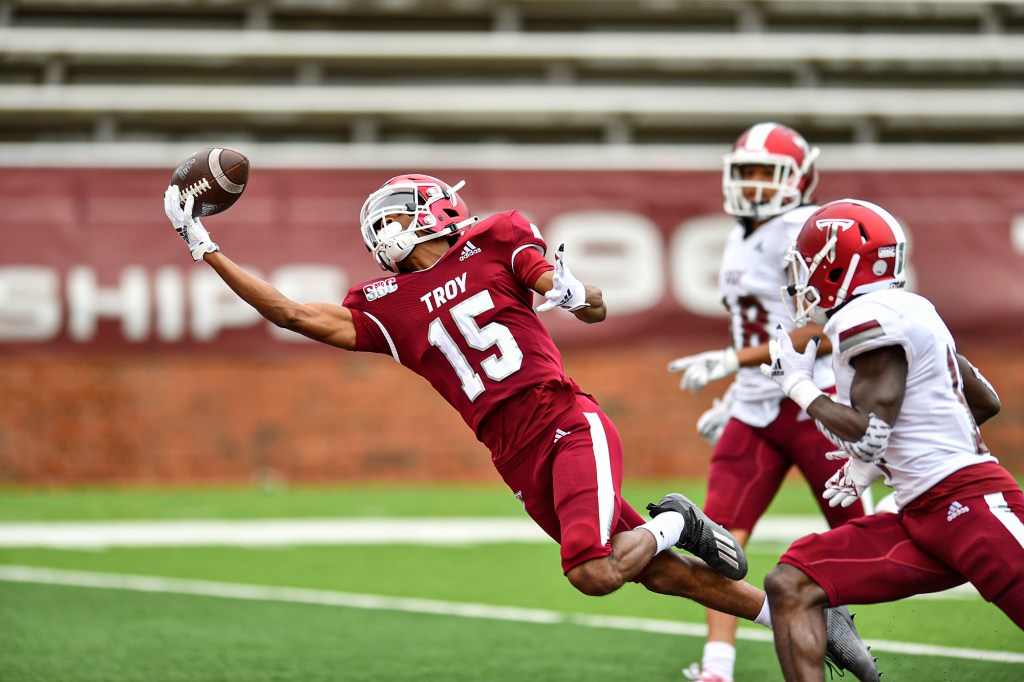 The team were split into two teams, Cardinal and White. The Cardinal team knocked off White 21-7.

“It was great being back on the field in a game situation, and I know our players were excited about it,” Lindsey said. “It was good to see our guys fly around and really compete. We’ve got good competition as whole which is what is different about this team. We have really good competition all the way around which makes everyone better. The key is to continue to push. We have to have a really good summer and get stronger and finish strong in the classroom.”

“Each of the quarterbacks threw a touchdown which was great, and I was really pleased with how well all three moved around and completed the ball,” Lindsey said. “We didn’t put the ball in jeopardy which was important.”

Earlier in the week Lindsey said the decision would not made solely based on their performances on Saturday. The competition for the starting role continues to be close.

“The last three or four practices there hasn’t been much separation between any of the quarterbacks,” Lindsey said. “They all have ability and all three have played in college which we feel good about. The guy that takes care of the ball the best and affects the team the best will win the job. There’s nothing better than competition.”

Free found a wide-open Luke Whittemore in the back of the endzone for team Cardinal, bringing the score to 14-0. Team White scored their only touchdown of the game when Powell found Deshon Staudemire for a 15-yard score. It was one of two big catches for Staudemire in the drive, he also had a 35-yard catch to set up the eventual touchdown.

Running back B.J. Smith was the only non-receiver to score a touchdown Saturday. He took a handoff eight yards for a touchdown.

“B.J. looked like the old B.J. Smith out there,” Lindsey said. “He’s been here a long time and worked hard to get back healthy. And then Kimani [Vidal] was his usual self. He’s going to be a special player here for us. I was also really impressed with Jamontez Woods and his ability to fight for three or four yards when there wasn’t much space. I was really pleased with the running backs.”

Defensively, Terrance Dunlap had an interception and lineman Luis Medina had two sacks.