Patriots getting production from entire roster 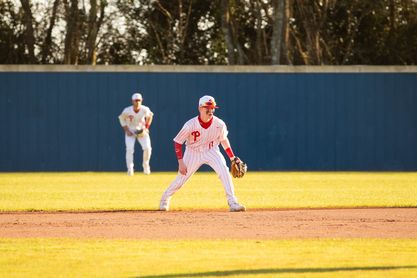 The Patriots find themselves on top of the AISA rankings one again. While they are getting plenty of production out of their veteran players this season, the play of the younger and more unheralded players has coach Rush Hixon excited.

The Patriots are 16-4-1 this season. They are in the midst of a five-game winning streak.

“I think we are playing pretty good ball right now,” Hixon said. “We are getting some quality outings on the mound and we are finding ways to score runs. All in all I am really pleased with where we are. Trying to continue to trend in the right direction.”

The Patriots, like in the past, continue to get plenty of contributions from veterans including Drew Nelson, Mayes White and Levi Sikes, but recently the Patriots have seen positive results from guys up and down the lineup, including players with less experience and playing time.

“We have some guys, who aren’t necessarily high profile names, but have stepped up and have had really quality years,” Hixon said. “For us to be who we want to be, you can’t be top heavy. You have to have depth and production throughout your whole lineup and pitching staff. I have been really pleased with the guys who have played in games this year.”

The Patriots recently have gotten a lot of production from Hunter Keenan and Scott Taylor Renfroe. Keenan recently had a five RBI game in the Patriots win over Abbeville Christian. During Pike’s five-game winnings streak, Renfroe has picked up four hits and has scored a total of nine runs. Those players, along with younger players have stepped up to provide quality depth for the Patriots.

“Scott Taylor Renfroe and Hunter Keenan have both put together good, productive years,” Hixon said. “Both those guys are seniors, but their not necessarily high profile names. Those guys have had really good years. Skylar Kidd has come along and has had a really good year for us. Recently Javon Christian has been good for us in the field and at the plate. Those guys are doing their job in the middle and the bottom of the lineup and are able to turn the lineup over to our more high profiled sticks. It’s been a good mixture at the top and the bottom.”

Whether it’s in a game or just in practice, the Patriots are competing nearly on a daily basis.

When finding out they were number one in the polls the initial rankings, Hixon addressed his team and quickly congratulated them. Since then, the rankings have not been a topic of conversation.

“Ultimately our goal is not to be No. 1 in week 12 of the season,” Hixon said. “It’s to be No. 1 in the final rankings. That’s still ahead of us and there is still a ton of work to be done. Every day there is a chance to get better or to get worse. I challenge them every single day to be the best version of themselves. If we continue to have that mindset I think the rankings will take care of itself and we will be able to put a really good, competitive team out there every time we play.”

The Patriots only have a couple more weeks remaining in the regular season. Hixon hopes to continue to work on the team’s weaknesses before heading into the postseason.

“Even when you win there are things to work on and get better at,” Hixon said. “Ultimately you want to have good momentum going into the playoffs. You want to feel confident in what your squad is doing. This is an extremely big few weeks for us with quality teams on the schedule. We want to continue to work on the blueprint that we put in front of them. If we buy into that and do the work and be best version of ourselves everyday, then that’s all I can ask for.”