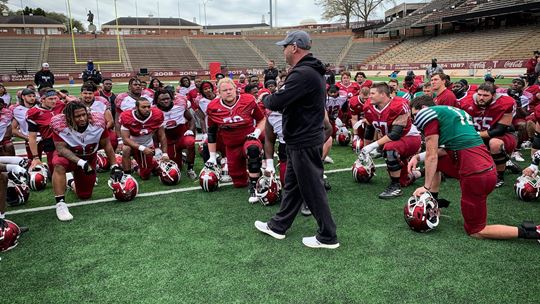 Photos /Troy Athletics Troy head coach Chip Lindsey talks with his players after a practice this spring. The Trojans will hold their annual T-Day scrimmage on April 10.

The Troy Trojans are three weeks into their spring practice and with T-Day on the horizon, head coach Chip Lindsey and the Trojans are making the most out of having a deep and experienced roster.

The Trojans had another strong recruiting class. Couple that with the return of 12 seniors from last year’s roster and the Trojans have one of their deepest teams in recent memory.

“I feel like after two recruiting classes we have more depth than we have had since I have been here,” Lindsey said. “That’s created a lot more competition. Competition is what makes everybody better. That’s been really good.”

Along with the strong recruiting class that included 10 offensive players and nine defensive players, the Trojans are welcoming back 12 of their 13 seniors from last year. B.J. Smith, Dylan Bradshaw, Reggie Todd, Kaylon Geiger will all return this year thanks to an extra year of eligibility given by the NCAA. The only senior from last year not returning is receiver Khalil McClain.

“I like the makeup of this team,” Lindsey said. “It feels like a lot of these guys have been around here forever. Most of them are going through their third year with me, which is always good. I really feel like the momentum of our team is heading in the right direction.”

Lindsey believes it says a lot about the teams culture that so many of the players elected to come back this season.

“With the situation with COVID, kids had the opportunity to come back,” Lindsey said. With the 13 seniors, 12 of them decided to come back. That says a lot about our culture and how much they enjoy being around each other. We have to use it to our advantage. That is something we haven’t been accustomed to in the first couple of years.”

The players coming back are entering year three under Lindsey. Knowing what to expect in practice, in meetings and in the weight room is something that Lindsey believes is very valuable.

“Whether it’s coaching staff or players, experience is everything,” Lindsey said. “The continuity of playing together and being together and talking the same lingo, there is nothing better than that. It makes life easier from the standpoint of expectations and how we want to practice and even going to class. Those things are in place and are an expectation now. I think early on your teams kind of feel you out and you try to feel them out. We are in a much better spot from that standpoint.”

“They’re all very capable,” Lindsey said. “All four of them are talented enough and capable of playing quarterback at this level.”

The Trojans will close out spring practice when they have their annual T-Day Scrimmage on Saturday, April 10 beginning at 1 p.m.