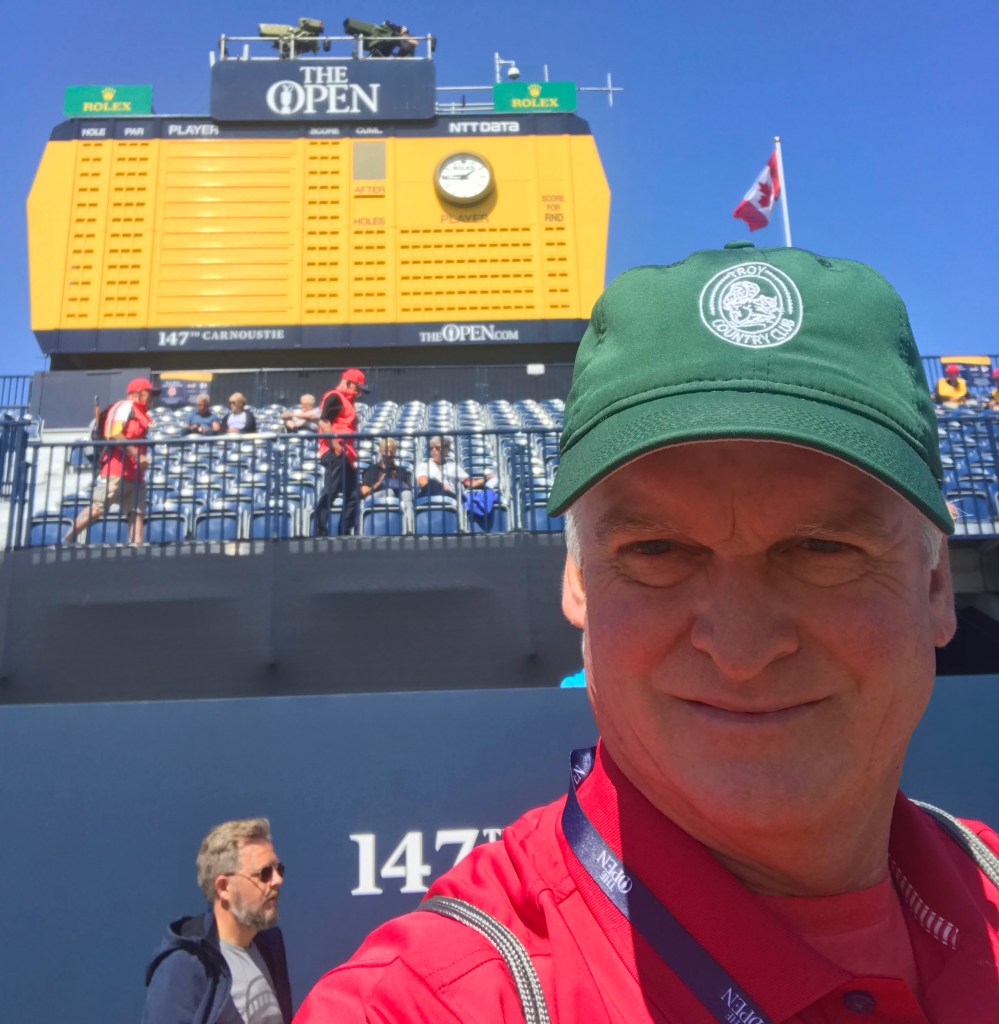 Submitted photo Collin McCrary stands in front of the iconic scoreboard at the British Open. McCrary works as a spotter in two to three PGA Tour events every year.

McCrary will be one of four inducted in the 2021 Hall of Fame class. He will be enshrined in a special ceremony on Friday, Sept. 3, 2021.

“It’s a big honor,” McCrary said. “I went online the other night and looked at all the other athletes and coaches that are in the hall of fame. Being in Troy since 1979 and looking at that list of names, it will be an honor to be a part of that fraternity.”

After graduating from Southland Academy in Americus, Ga., McCrary attended Troy State University from 1980-1984. Since graduating in 1984, McCrary has kept up with and supported the Troy University golf program for the past 37 years.

“The whole golf program has been a big part of my life even after I graduated,” McCrary said. “I really enjoy keeping up with the program, supporting the program and helping the program the last 35 plus years. I have seen it change a lot. It’s really fun.”

McCrary was an All-American while a member of the Troy golf team. He earned multiple All-Gulf South Conference honors while also leading the Trojans to four-straight conference champions.

McCrary earned third team All-America honors his senior year when the Trojans finished second at the Division II National Championship. During the 1983 season, McCrary shot Troy’s lowest score of the season, a 63 at the Southeastern Collegiate.  McCrary helped lead the Trojans to five team titles during the 1981 season.

“I was a solid, consistent player who didn’t win a lot of individual tournaments, but I felt like I helped the team a lot,” McCrary said. “We had some very successful years, really all four years we had a lot of team victories.”

McCrary was a four-year letterman while a member of the Troy golf team.

“I know how much the program meant to me coming from a small town in Georgia,” McCrary said. “I just know how much the college experience helped me grow up and learn how to interact and deal with other people. I enjoy watching other young, men and women come in as freshman and watch them graduate and go out in the real world.”

Golf is a passion for McCrary. Although he played multiple sports in high school he eventually found his way to golf.

“I grew up in Americus, a massive football town,” McCrary said. “I played all sports until I got into the eighth or ninth grade. I was physically not as big or strong. Back then a lot of people that weren’t big or strong enough to play football or basketball ended up playing golf, tennis and cross country.”

McCrary spends his spare time spotting for NBC Sports at some of the biggest PGA Tournaments. He believes the game of golf has changed over the years. Everything from the equipment to the size and athleticism of the golfers is different.

“I just did the Players Championship and there are a lot of kids like, Cameron Davis, who I stand next to on the tee boxes and they look like point guards in the NBA,” McCrary said. “Not only are they six-foot-three or six-foot-five, they are muscular. It’s a different athlete.”

When he is not working as a financial advisor, along with being a spotter at some of the biggest PGA Tour golf tournaments, McCrary fills his time playing in tournaments.

“I still play in five to six tournaments a year, mostly senior tournaments,” McCrary said. “I play in a few scratch tour events down in the panhandle in the senior division. Along with a couple of local Troy golfers, we travel down there to play and have a really good time. I spot two to three PGA Tour events a year. I’m a really big fan of the game. I enjoy helping young kids at our country club and other places. I like to watch them progress. I still like to go out and hit balls from time to time.”

When it comes to the future, McCrary hopes and plans to continue to stay close to the game and help younger golfers.

“I’m about to turn 60 and I have done a lot in my life,” McCrary said. “I have been blessed with a successful financial advisory business here in Troy. I can see myself continuing to have an interest in helping junior golfers and college golfers and giving them advice from time to time.”