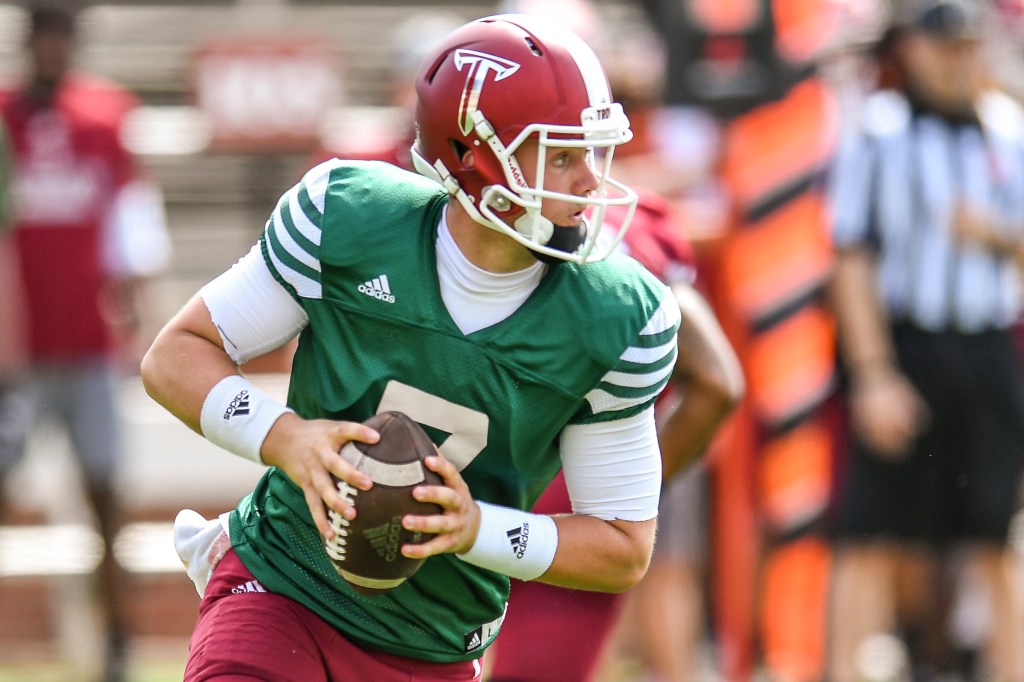 Photos /Troy Athletics The Troy Trojans held their first scrimmage of the spring on Saturday morning.

The Troy Trojans held their first scrimmage of spring practice on Saturday at Veterans Memorial Stadium.

The Trojans are now three weeks into spring practice. They will host the annual T-Day Game on Saturday, April 10.

The Trojans ran more than 100 plays on Saturday and head coach Chip Lindsey liked what he saw out of his team.

“We were trying to stretch our guys a little bit,” Lindsey said. “We were making them tired and grind some. With the naked eye I thought we did some nice things. Offensively, we got into rhythm a couple times. I thought all three quarterbacks did some things.”

All spring long the Trojans have put a heavy emphasis on not turning the ball over. Except for one tipped ball interception, the Trojan offense didn’t turn the ball over on Saturday.

“Had the one turnover on the tipped ball, but other than that we didn’t put the ball in jeopardy that much,” Lindsey said. “That’s something that has been an emphasis for us this spring. We have to stop turning the ball over and play championship football. I was really pleased.”

Lindsey admitted they kind of hamstrung the defense by not allowing them to line up in unique or different types of sets.

“We kind of tied their hands a little bit,” Lindsey said. “We didn’t allow unique looks or pressures. Sometimes that’s an advantage for the offense. Defensively we got a couple stops, but not enough. We have to do a better job of playing base down football. That is something we really emphasized today. We’ll get back to work on that next week.”

The battle for the starting quarterback position continued to take shape on Saturday. Each quarterback, Gunnar Watson, Jacob Free and Taylor Powell, threw a touchdown during the scrimmage.

“I thought all three showed some good things,” Lindsey said. “We didn’t turn the ball over except for the one tipped ball, so I thought that was really impressive. We are looking for that guy who wants to take charge and is under control and can keep us in a rhythm. It’s a good competition. It’s made all three of them better and that’s what you want in any competition.”

The Trojans will have five more days of practice beginning on Tuesday before holding T-Day.