Trojans making the most out of a disappointing loss 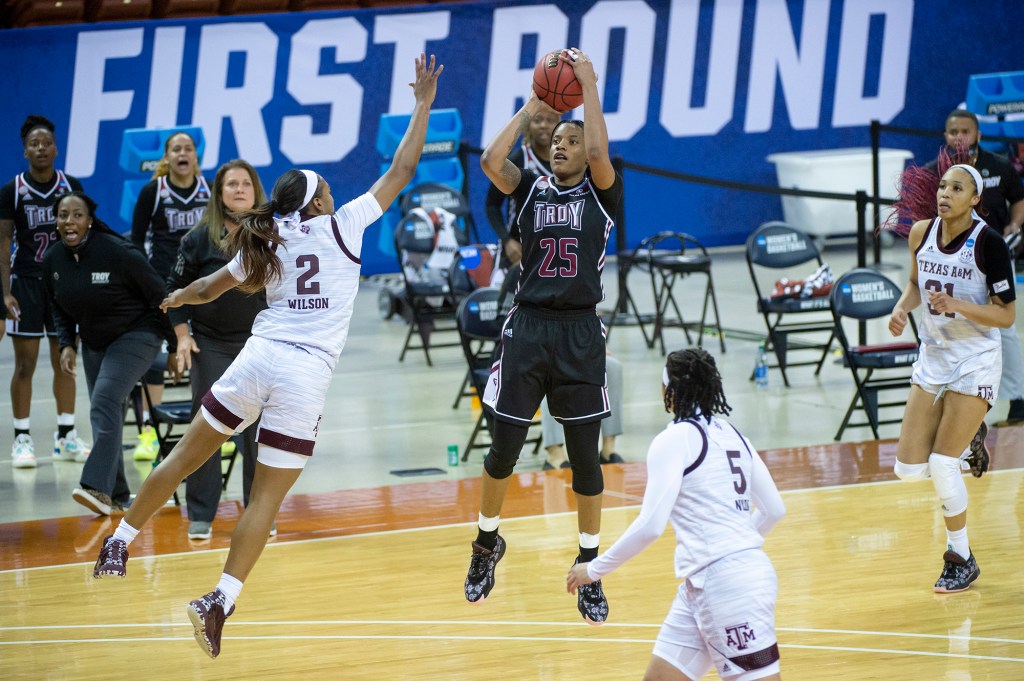 Photos /Troy Athletics The Troy Trojans fell to the second seeded Texas A&M Aggies in a close opening round game on Monday evening. Above: Alexus Dye goes up for a shot.

The Troy Trojans came up short in becoming the first No. 15 seed to knock off a No. 2 seed in the Women’s NCAA Tournament on Monday evening.

The Trojans led midway through the fourth quarter and trailed by just two in the final minute before ultimately losing 84-80 to Texas A&M.

“For everyone who watched, the way that our players played says more than I can ever say with words. They are unbelievable. Their fight is unbelievable. Their will to win is unbelievable,” head coach Chanda Rigby said. “If you look at the differences between the two programs, you know we are going up against one of the top programs in the country. Our players just weren’t going to quit. They found a way to claw back at halftime. Anyone who watched the games knows that we have winners.”

The game wasn’t without its fair share of controversies on Monday. Tyasia Moore was called for a charge with the Trojans down two with 54 seconds remaining. The Trojans had a chance to complete a three-point play to give them a lead if a blocking call was called instead of a charge. With the Trojans trailing by two with fewer than four seconds remaining. An in-bound pass by the Aggies was mishandled and went into the backcourt. Backcourt was not called keeping the ball with the Aggies. After a foul put the Aggies on the line, Texas A&M was able to clinch the win.

“It just looked like she touched it and it went into the backcourt,” Rigby said. “It just looked very evident that that happened. We were seeing if we could get the call corrected, but it was just not the way it went. We had all the momentum at that point. If that was the right call and we would have gotten that call, I don’t think there is any way we would have lost the game because I don’t think the will of my players would allow us to lose.”

Despite the sour ending, Rigby’s message to her players at the conclusion of the game was a positive one.

“The message is: whether we won or lost that game is not the most important thing, the things that they learned about themselves and each other is,” Rigby said. “Taking those lessons and learning to be champions in life is what is important. If they can fight that hard in a basketball game, they can fight that hard for a job they want or a marriage or to raise their kids. I want them to remember they are more than champions. That’s our mantra. We are more than champions, and there is a bigger picture. The bigger picture is what is important. They are able to fight back in any situation.”

The Trojans finish the season with a 22-6 record. They advanced to their fourth-ever NCAA Tournament after winning the Sun Belt Conference Tournament Championship for the third time under coach Rigby. When Rigby arrived in Troy, the Trojans had the second worst RPI in the country. Since then, the Trojans have four conference champions.

Despite the success, the Trojans have endured two consecutive disappointing endings to their season.

“We’ve had two pretty disappointing endings the last two years,” Rigby said. “We felt like we had teams both years that could achieve what our program goal was and that is making a deep run in the NCAA Tournament. We’ve had two teams poised to do that, but for different reasons it didn’t happen. This is where faith kicks in. The thing that built this program was faith. When we got to Troy they were second to last in the nation in RPI and we won four championships in the last six years. You don’t do something like that without having faith and believing in something you don’t see.”

Rigby believes that same faith is needed moving forward.
“We need the faith to come back in now because it feels like you just got kicked in the teeth twice,” Rigby said. “Hey that’s life. You have to have faith and say you know what we are going to go back to the drawing board. There are plenty of lessons we learned here in the NCAA Tournament. We didn’t know what we didn’t know before we played Texas A&M. We are going to come back stronger. Without a doubt, we will come back stronger.”