Trojans fall to Aggies in close opening round game 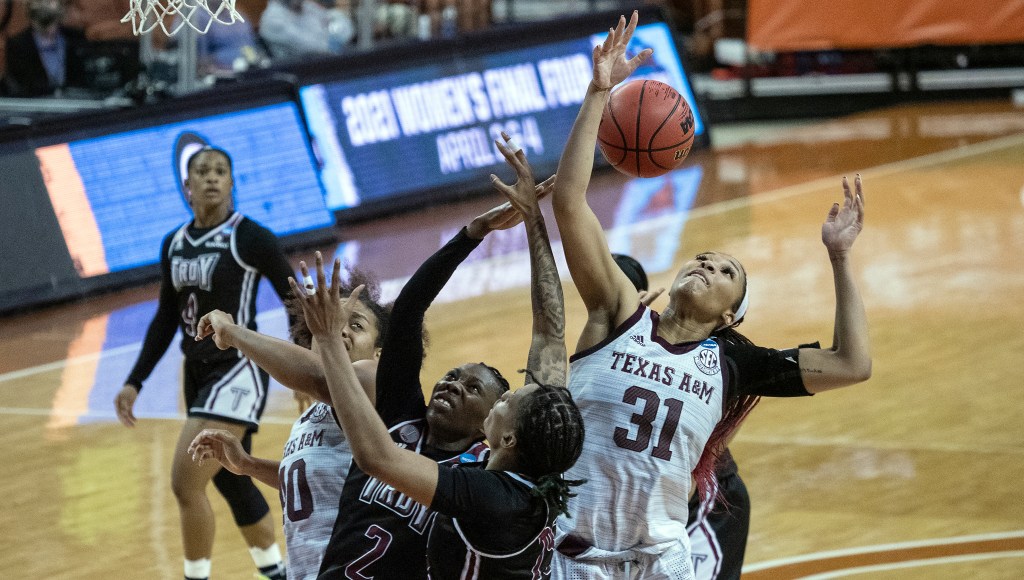 Photo/NCAA The Trojans fell to Texas A&M 84-80 on Monday evening in the opening round of the NCAA Tournament.

The Troy Trojans’ shot at making history came up a short Monday evening when they fell to Texas A&M 84-80 in Austin, Texas in the opening round of the NCAA Tournament.

A 15 seed has never beaten a two seed in the Women’s NCAA Tournament. The Trojans were close to being the first on Monday when they led by two midway through the fourth quarter and trailed by just two in the final minute of the contest.

“As great of a team as Texas A&M is, the 15 seed had them on the ropes,” Troy head Chanda Rigby said. “It could have been a very big upset. They are a very good team and Troy is a very good team.

The Trojans found themselves down by 14 at halftime and by as many as 16 points early in the third quarter. The Trojans cut their deficit down to single digits entering the fourth quarter at 65-58.

“It came down to the second half,” Rigby said. “I think we were down 14 at the half. Our goal was to get it down to single digits by the fourth quarter. We cut way into it in the fourth quarter. I thought we had a good chance…We kept battling to the very end.”

There were a few controversial moments in the fourth quarter On Monday.  Tyasia Moore was called for a charge with the Trojans down two with 54 seconds remaining. The Trojans had a chance to complete a three-point play to give them a lead if a blocking call was called instead of a charge. The most questionable play occurred with the Trojans trailing by two with under four seconds remaining. An in-bound pass by the Aggies was mishandled and went into the backcourt. Backcourt was not called keeping the ball with the Aggies. After a foul put the Aggies on the line, Texas A&M was able to clinch the win.

“It just looked like she touched it and it went into the back court,” Rigby said. “It just looked very evident that that happened. We were seeing if we could get the call corrected, but it was just not the way it went. We had all the momentum at that point. If that was the right call and we would have gotten that call, I don’t think there is any way we would have lost the game because I don’t think the will of my players would allow us to lose.”

Senior Alexus Dye finished the game with 26 points and 11 rebounds. She fouled out in the final stages after she was called for a tripping foul. The call occurred with the Trojans trailing by two points with 31 seconds remaining.

The Trojans had three players finish in double figures. Along with Dye’s 26 points, The Trojans got 20 points and 11 rebounds from Felmas Koranga and 11 points from Janiah Sandifer.