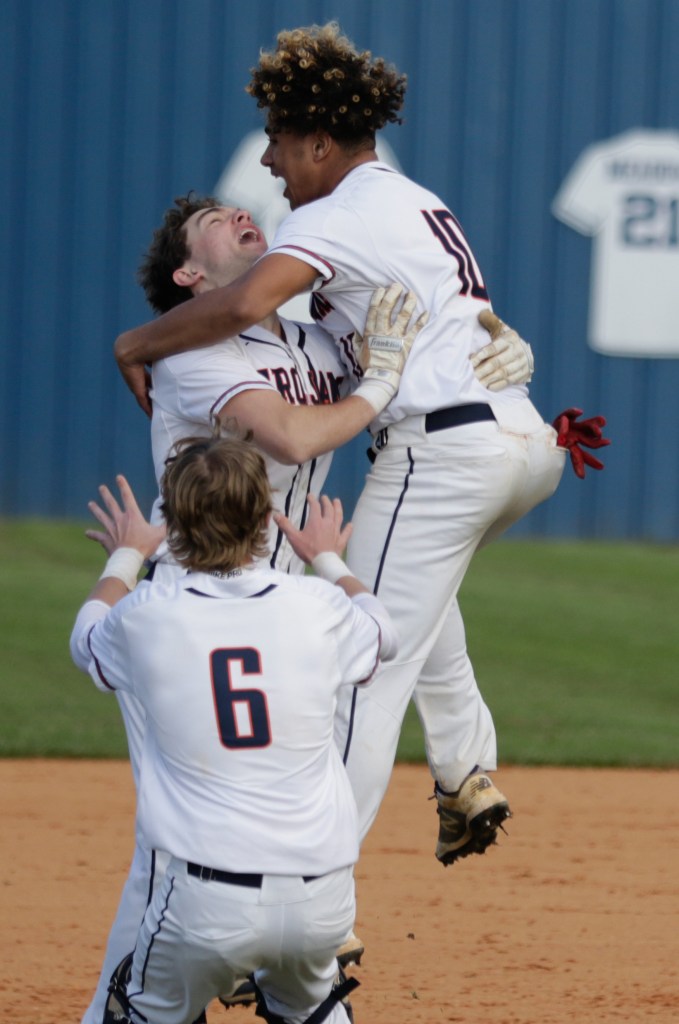 It has been a long time since the Trojans of Charles Henderson High have celebrated with a dog pile on the infield at Hogan’s Hole, and Saturday’s dramatic 6-5, come-from-behind extra-inning win over Dothan on Saturday was worth the wait.

Trailing 5-4 entering the bottom of the ninth, the Trojans manufactured two runs when senior catcher Bailey Sparrow walked with two outs, Darryl Lee drove the ball to the deepest part of center field for a double, scoring Sparrow from first, then Lee reached third on a wild pitch. Lee scored the winning run when senior Ben Reeves hit a grounder to the third baseman who had to charge the ball, the throw was up the line allowing Reeves to be safe at first, scoring Lee.

“I told our team after the game that they played their butts off all nine innings, and I hope we can carry this on the rest of the season,” said CHHS first-year Head Coach Chase Smartt. “We played hard from the first pitch to the last pitch. We did not lay off anything. Ben competed and put the ball in play. Darryl did an exceptional job on the mound and with the bat. Today was just a fun day for me to coach today.”

The win by CHHS avenged a loss from earlier in the season when the Trojans went to Dothan and lost 13-0, as three Dothan pitchers combined for a perfect game. Dothan is a relatively new school that was formed when Northview and Dothan High merged, and now competes in AHSAA Class 7A.

Lee was the starting pitcher for the Trojans and was strong, allowing only three earned runs on five hits for 6 1/3 innings, while striking out seven, keeping the Wolves off balance with his sharp fastball and curve.

The Trojans took a 3-0 lead in the bottom of the first inning when J.B. Sanders singled, Sparrow walked, Lee doubled, and Will Templin singled.

Dothan bounced back in the top of the third to tie the score at 3-3 after Te-Relle George-Mills was hit by a pitch, Blake Wynn and Jace Dyer singled, and Bauer Sharp doubled.

CHHS broke the tie in the bottom of the sixth to go up 4-3 when Lee singled and scored on a double by Adrian Cardwell.

The Wolves fought back to tie the score again in the top of the seventh inning as Dyer reached on an error and later scored.

CHHS loaded the bases with one out in the bottom of the seventh inning, but George-Mills, pitching in relief, struck out the next two batters to send the game into extra innings tied at 4-4.

Dothan went up 5-4 in the top of the ninth inning as Dyer doubled and scored in the inning.

George-Mills got two quick outs to open the bottom of the ninth, before Sparrow worked the count full and laid off ball four to draw the walk. Lee followed with a deep drive to center to score Sparrow from first and tie the game at 5-5, then Reeves hit the ball down the third baseline and beat out the throw, scoring Lee for the 6-5 victory.

Cam Foley got the win on the mount for the Trojans, pitching the final 2 2/3 innings, allowing no earned runs, giving up only two hits, walking just one and striking out three.

Lee led CHHS at the plate with three hits, Sanders had two, while Cardwell and Templin had one hit apiece.

Dyer and Chase Alsop had two hit apiece for Dothan, while Blake Wynn, Matthew Omuhundro and Sharp also had one hit each.

The Trojans are at home Monday night for a double-header against Enterprise High.