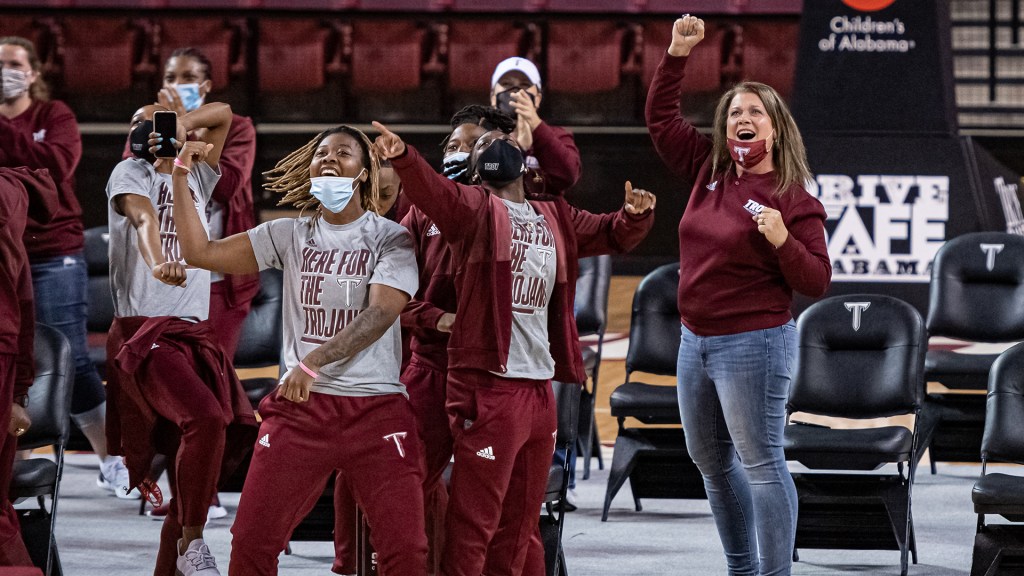 The Troy Trojans left for Texas on Tuesday for the start of the upcoming NCAA Tournament. The Trojans found out on Monday evening their first round opponent will be the second seeded Texas A&M Aggies on Monday beginning at 5 p.m. on ESPN2.

“It feels amazing,” head coach Chanda Rigby said. “We are blessed to be in this situation and blessed for being healthy.

“We want to put Troy on a national stage through women’s basketball,” Rigby said. “When the Power T came up, when they announced the teams that are set to go, that was the first big cheer that we gave (Monday night). It feels great. We are so proud to have the Power T up there in the group with the 64 teams that will be in the tournament.”

“Everything is new this year with the NET (rankings),” Rigby said. “If you look at the RPI, we could have been a 12 seed. The NET, it’s the first year we have gone to that, it changes things and it moves our numbers in a way we didn’t want to move it. It’s a surprise totally that we would be playing Texas A&M.”

The Aggies are 23-2 overall this season. They finished 13-1 in conference play and fell in the Southeastern Conference semifinals to Georgia. The Aggies are ranked fourth in the latest polls and was projected as a number one seed by ESPN’s Charlie Creme. Nine of the Aggie’s 23 wins have come against ranked opponents.

This will be the first matchup between the Trojans and the Aggies. Rigby and the Trojans didn’t know much about their opening round opponent on Monday. Rigby believes her team compares to Arkansas out of the Southeastern Conference, a team the Aggies defeated by one and two points in their two meetings this season.

“We run the same fast break, we strive for a lot of the same things,” Rigby said. “If I’m not wrong Arkansas lost to them by one point the first time they played them and they lost by two points more recently. I don’t know if it’s a fair thing to compare or a fair thing to say. We know they are going to be a very tough opponent and they are very good.”

This will be Troy’s third trip to the NCAA Tournament under Rigby. In each of their first two tournaments, the Trojans have played teams, Oregon State and Mississippi State, that later advanced to the Final Four.

“Every year that we have gone, we have learned things we didn’t know before,” Rigby said. “We have drawn about the toughest teams that you can draw first. We used to tell our teams to block out. We thought we were pretty good rebounders doing that. You