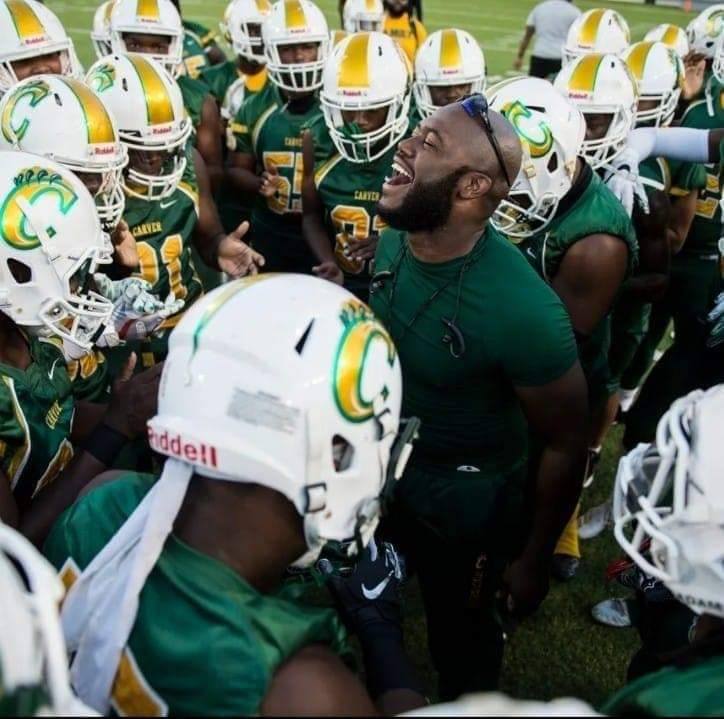 After officially being named head football coach at Charles Henderson High School on Friday morning, Quinn Hambrite arrived on campus on Monday ready to get to work.

Hambrite takes over as head coach and athletic director for Brad McCoy, who resigned in January.

“This is a chapter of my life that I planned on having and it came at the right time for me and my wife,” Hambrite said. “It’s a blessing. With everything going on with COVID-19, it’s a blessing that I was able to interview for it and subsequently they gave me the job. I’m excited about it.”

Hambrite was the defensive coordinator at Carver High School from 2018 through the 2020 season. He also spent time as a coach at Prattville and Hillcrest-Evergreen. He was the head coach at Central-Hayneville in 2017.

Hambrite arrives at Charles Henderson with lofty expectations, stating that he believes the team isn’t far from getting back to its winning ways.

“Charles Henderson is a place not far from winning,” Hambrite said. “People forget they are like eight years removed from making a state championship run. That mentality I felt like was still here. You have the athletes and the resources to make it happen. They have a great administration that backs you. I felt talking with them that this is the place for me.

“It feels like home for me. Everybody is warming, everybody is loving. It’s a small town, home grown and it’s almost like the perfect place.”

Hambrite did his homework before calling Charles Henderson home. Before being named head coach, Hambrite took a tour of the campus and saw plenty of familiar faces he recognized from watching film.

“I recognized a lot of their faces,” Hambrite said. “When I want to go somewhere I’m going to know where I’m going. I saw a few kids and noticed them. Their eyes lit up when they realized I knew of them and knew who they were and could call out their football number, and tell them they played well, or you did a good job, or you’re tough.”

After arriving in Troy, Hambrite spent time introducing himself to the middle school and high school football teams.

“I met with the middle school and assured them they have a coach that is going to stay and for the next six or seven years they need to wear orange and blue,” Hambrite said. “I assured them this is the place to be. They were extremely excited and giddy. Afterwards I had a meeting here (CHHS) and the kids seemed very excited. I have gotten positive feedback from a few administrators, saying that’s all they (kids) have been talking about is getting back to it. The excitement around here for football is here.”

The Trojans find themselves a little behind this offseason due to the transition. Hambrite and the Trojans will use the next couple of months to prepare for the summer and ultimately the 2021 season.

“We want to get bigger, stronger and faster,” Hambrite said. “That’s what the spring is for. We are two months behind. We lost January and we pretty much lost February. We have to focus on what we need to focus on. Making sure we are bulking up and getting ready for the summertime grind.

“We have to work on ourselves right now. I’m not worried about who we are playing in the spring or the first game of the season. I’m worried about Charles Henderson and how we can improve fundamentally and get stronger. We are late, so they have to get accustomed to the offense, accustomed to the defense and my coaching style.”