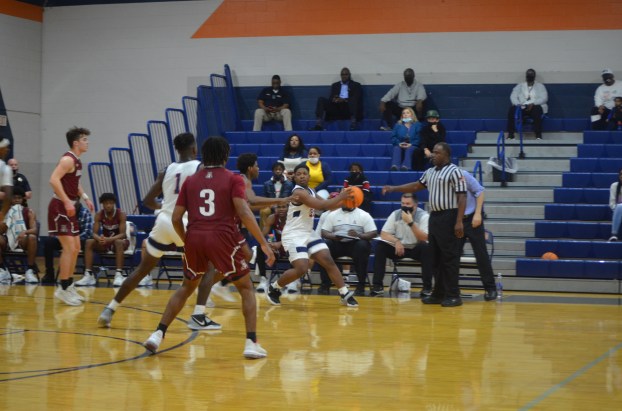 Trojans advance to area championship with win over Andalusia

The Charles Henderson Trojans will play for an area championship after defeating Andalusia 56-42 in Troy on Wednesday evening.

The loss for Andalusia ends their season. The Trojans will head to Greenville on Friday night where they will play for the area championship.

“You had to win tonight or your season is over,” head coach Doug Branson said. “Andalusia came in here fired up with a lot of energy. I thought we had the same energy, we were on the same level as them. I thought we were a little too hyped up at the beginning of the game. I thought once we settled down we were able to get stops and that contributed to us stretching out the lead.”

The Bulldogs scored the first five points in the third quarter and eventually went on a 9-2 run to get to within six at 32-26.

The Trojans rebounded and closed out the quarter on a 9-1 run and went into the fourth leading 41-27.

“They were in there during halftime talking about this is our last 16 minutes,” Branson said. “We talked about that in our locker room too, we just didn’t come out with that same energy. You have to stem that tide and settle in. Start doing the things that made you successful in the first half. We were able to do that by making buckets and getting to the free throw line.”

The Bulldogs, trailing 46-29 in the fourth quarter, went on a 9-0 run to bring their deficit back to single digits, but ultimately ran out of time.

Charles Henderson’s game against Greenville is scheduled for Friday night beginning at 6 p.m.

“Now we get to play for a championship,” Branson said. “We are going to go to Greenville and hopefully we have something for them.”

Joel Kervin had a surprise awaiting him. However, because the answering machine on the home landline phone was turned off,... read more