Eagles playing it safe with opening day coming in March 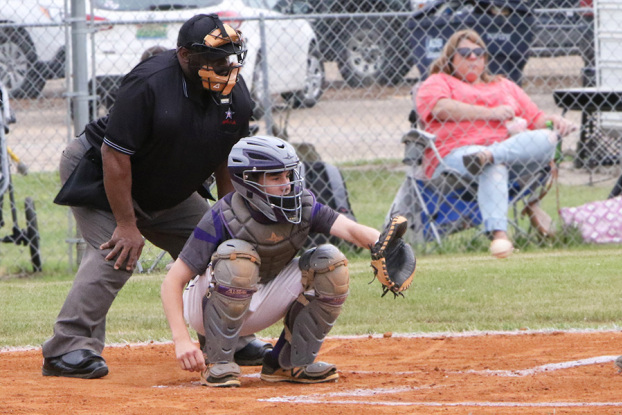 photo/april brown | The Messenger Jeff Warrick sets up behind the plate as Goshen’s catcher during a game last season. The Eagles are scheduled to begin the 2021 season on March 1.

With less then a month remaining until opening day, the Goshen Eagle baseball team is patiently preparing for the upcoming season.

It’s been almost a year since the Eagles were last on the baseball field. They are in their second week of practice and head coach Robby Kinsaul has been pleased with what he has seen.

“They have been good so far,” Kinsaul said. “We still have some in basketball right now, but once they get there, to get the whole team out there will be good.”

When the Eagles hit the field nearly two weeks ago they did so with excitement knowing that baseball was back. They began practice with seven players from last season no longer on the team.

“They were ready,” Kinsaul said. “It was very unfortunate (last year). We lost seven kids from last year and three guys that have been starting for years for us. So, it’s going to be tough for us to replace (them).”

The Eagles spent the last month and a half in the weight room, but due to COVID-19 concerns, Goshen has been behind most schools when it comes to preparing for the upcoming season. Although teams are able to hold full practices, the Eagles are only throwing.

“Normally when you start the first of January you have three weeks of throwing only,” Kinsaul said. “With us just coming back, we are technically where we can really practice, but we haven’t done any of that yet.”

The Eagles began to hit and throw bullpen sessions during Tuesday’s practice. Kinsaul admitted that they have yet to throw further than 90 feet during practice.

“We are just trying to build up our arm strength to make sure no injuries occur,” Kinsaul said.

Due to virtual learning in all Pike County Schools, Goshen has been forced to push back the start of their season to March 1, leaving them plenty of time to slowly prepare for the season.

“We are not going to rush anything,” Kinsaul said. “We still have a month. We are going to use that to our advantage and use that time wisely.”

Kinsaul hopes his players use the time to get better every day, while at the same time avoid any injuries leading up to the start of the season.

Despite being told to take things easy during practice, some of the players are trying to speed up the process.

“They want to do more, but they have to understand it’s a process,” Kinsaul said. “We didn’t have the three weeks of throwing. Those were things that were out of our control. We haven’t thrown more than 90 feet, but they try to back it up a little bit, so you have to keep a close eye on it.”

The Eagles will open up against Daleville on March 1.