Healthy Trojans gearing up for the postseason 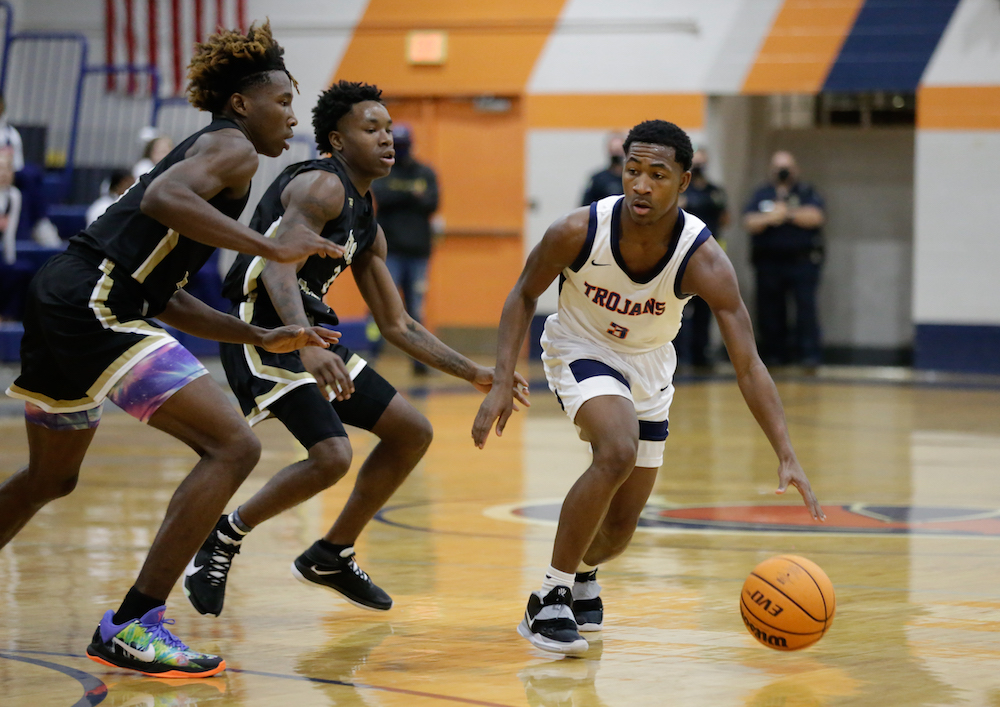 photo/DAN SMITH | The Messenger Akeives Shorts of CHHS (3) led the Trojans in scoring with 26 points in a slugfest against Greenville Tuesday night.

The Charles Henderson Trojans knocked off rival Pike County 45-42 in what was a entertaining contest from start to finish on Tuesday night.

The win vaulted the Trojans to 16-7 on the season. And, the with regular season hitting it’s final stages, head coach Doug Branson believes his team is starting to resemble the team from the beginning of the season.

Tay Knox and Akeives Shorts, two of Charles Henderson’s top scorers missed time after sustaining injuries in Charles Henderson’s game against Greenville earlier this month. Both players have since come back to the lineup, and for the first time since the beginning of the season the Trojans are healthy.

“We started off really hot and won a bunch of games in a row,” Branson said. “Then we got to the break in between semesters and we had two guys get injured.

“We relied on each other and guys stepped up. We won a few and lost a couple more. Just this week we went down to Andalusia and beat them. For the first time in three weeks at least we felt and looked semi-healthy.”

The Trojans couldn’t have gotten healthier at a better time with the playoffs looming. The Trojans have just three games remaining before the start of the playoffs.

“We went into Pike County last night and no one was hobbling and we felt more intact,” Branson said. “Now we are winding down the year and we are getting ready for area play and championship play. Hopefully we’re past the injury bug and we’re able to start getting more cohesive as a unit again and start playing really well.”

With two of their top players out, the Trojans had to rely on other players to fill the role including MJ Horne and Kameron Ousley. Branson believes the players learned a lot about themselves over the last few weeks.

“It’s always good to get minutes and be on the floor,” Branson said. “It emphasizes some of your strengths and it emphasizes some of your weaknesses at times too. Those guys went out there and performed admirably. You don’t replace a guy who is averaging 21 points per game. You fill in with multiple people. MJ Horne came in and did a really nice job for us. Kameron Ousley did a really nice job. Jywon Boyd picked up some scoring for us when Shorts was out.”

The Trojans have three more games remaining on their schedule. The Trojans will host Carroll on Friday in what will be their final game in front of fans due to COVID-19. They will then host Pike County next Tuesday before closing out the season at home against Abbeville next Friday.

“We have to get back to executing on both ends of the floor,” Branson said.  “I feel like we have gotten a little stagnant in our offense. We haven’t produced as many points and I also feel like our defense has been as good as it could be or should be. Our goal, our objective is to execute.”