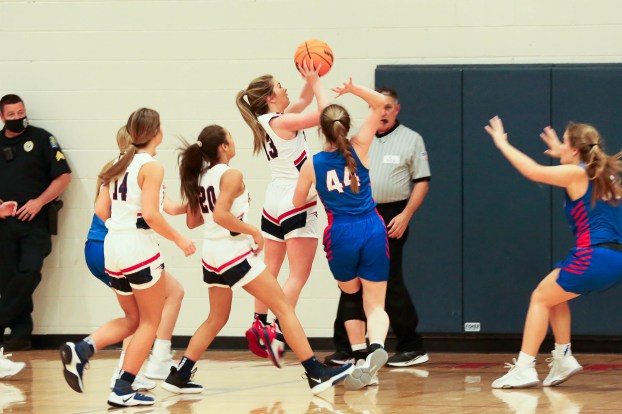 photo/candace nelson | The Messenger The Pike Liberal Arts Patriots enter 2021 with a 4-4 record on the season.

The Pike Liberal Arts Patriots are hoping for a strong start to the 2021 portion of their schedule.

Eight games into their schedule, coach Brandon Matthews and the Lady Patriots have faced their fair share of challenges, but enter 2021 with a 4-4 record. Despite scheduling changes the Patriots continue to work hard and stay focused on accomplishing their goals.

The Patriots will enter 2021 with a lot of uncertainties when it comes to their schedule. After last playing Tuscaloosa Academy on Tuesday, it may be a few weeks before they play again.

“I don’t know how crazy are schedule is going to be moving forward,” Matthews said. “We have to adopt the mindset of controlling the things that are within our power to control.”

The Patriots have had multiple days off in between games already this season. Despite all the practice time, there is no substitution for live game action.

“It’s challenging,” Matthews said. “It’s not ideal. There is no simulation for games. In terms of identifying roles and for me trying to establish what we are good at there are challenges. There are no excuses. Our team takes ownership of everything win or lose. Everybody else is dealing with these things too, so what we have to do is buy into the mindsight of controlling the things we have the power to control.”

The Patriots enter 2021 coming off a last second loss to Tuscaloosa Academy. It came after they led the entire game. Before that the Patriots took on Glenwood in a rematch of last year’s playoff game in Montgomery.

“We play good defense and we have a lot of different players who can contribute in different ways,” Matthews said. “We have a young team and trying to establish roles is kind of where we are at right now.”

The Patriots entered the season with some new faces and the goal was to have the team gel throughout the season. Despite all the challenges, the Patriots continue to grow as a team.

“In terms of questioning the girls and whether they love each other, I don’t have that in question,” Matthew said. “These girls are great teammates. We have people growing into leaders on a regular basis. That’s a win for me to see these girls growing up.”

As of Thursday, the Patriots are not scheduled to play until January 12 against Morgan.  Matthews Is hopeful he can schedule a game before then so his players can continue to get some game experience heading into area play.

Lady Bulldogs eager to get back to winning ways

The Pike County Bulldogs went into the 2020-2021 basketball season eager to turn back time and bring success to the... read more