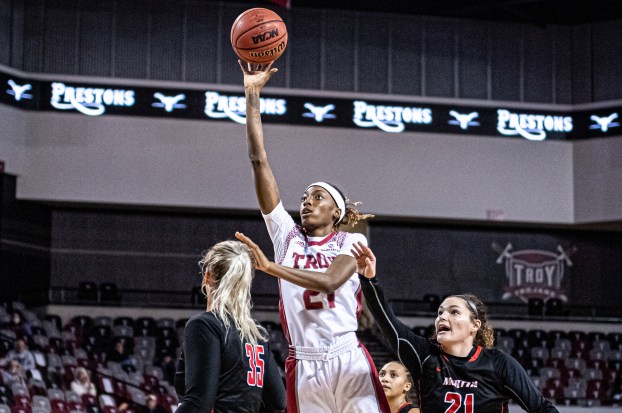 photo/troy athletics | The Messenger Jhileiya Dunlap goes up for a shot for the Trojans earlier this year inside Trojan Arena.

The Troy Women’s basketball team will begin their defense of last year’s Sun Belt Conference championship when they host Appalachian State in the conference opener on Friday evening.

The Trojans won the regular season championship a season ago and were picked to repeat as champions at the beginning of the season.

They begin their conference season in the comfy confines of Trojan Arena where the Trojans are a perfect 3-0 this season. They are 15-1 inside Trojan Arena going back to last season.

The Trojans have had an up down start to their season. They take a 4-3 record into Friday’s game. They are coming off a 90-71 win over Martin Methodist last weekend. They also have wins against LaGrange, Southeastern Louisiana and Chattanooga.

The Trojans are third in scoring margin at +10 behind only Arkansas State and Georgia Southern. The Trojans rank second with a shooting percentage of 44 percent.

Senior Alexus Dye leads the Trojans with 19 points per game to go along with 10 rebounds. Dye ranks first in the conference in both scoring and rebounding.

The Mountaineers have played in just six games this season and are 3-3 on the year. They are coming off a 107-44 loss to Georgia. They have lost three out of their last four games.

The Mountaineers rank in the bottom half in the league in both scoring offense and defense.

The Troy Men’s basketball team celebrates the new year by the opening of Sun Belt Conference play. The Trojans will... read more