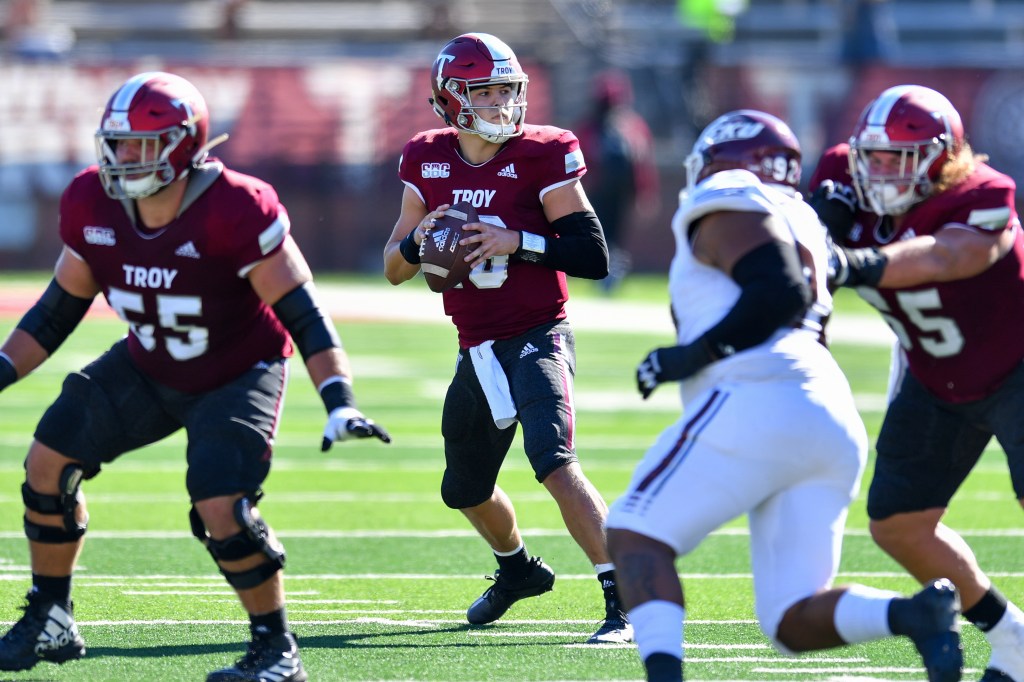 After an up and down season at quarterback, the Trojans head back to the drawing board this offseason where they hope to find more stability.

Stability at the quarterback position hasn’t been a problem for the Trojans in recent years. Brandon Silvers had a lock on the position for four years and Kaleb Baker took over in 2018 and 2019.

The Trojans entered fall camp knowing they would have a competition to determine who the starting quarterback would be in 2020. The competitors were Gunnar Watson, Jacob Free, Parker McNeil and Kyle Toole.

Watson would go on to win the starting job heading into the start of the season. By season’s end all four quarterbacks would see game action. Watson played in nine of Troy’s 11 games this season. He missed two games due to a rib injury. Watson completed 70 percent of his passes in 2020. He threw for a total of 2,141 yards and had 16 touchdowns and seven interceptions.

When Watson was not on the field, Free assumed the role of starting quarterback. Free played in six games and started three of them. Free completed 55.2 percent of his passes and threw for 1,051 yards, six touchdowns and five interceptions.

With 2020 now in the rearview mirror there may be another quarterback competition this spring and summer and the Trojans brought in a pair of new contenders to fight for the starting job.

Hawkins was a three-year starter at Bainbridge High School in Bainbridge, Georgia. Hawkins led the Bearcats to a state championship in 2018. Hawkins is a two-time all-region selection and he earned first team honors in 2019.

“He is a guy that can really throw the football,” head coach Chip Lindsey said. “In his career, he leads Bainbridge in every category. He has thrown for over 5,000 yards and 50 touchdowns. Just a really talented guy and we are really excited to get him. Wishing those guys the best of luck as he finishes his season.”

Powell played in six games during his redshirt sophomore season (2019) at Missouri and had one start. Powell completed 29-of-62 passes for 105 yards. He had one touchdown and two interceptions. Powell saw playing time when the Trojans traveled to play Missouri in 2019. In that game Powell completed six of his eight passes for 57 yards.

Powell completed six of his 14 passes as a redshirt freshman in 2018 and threw for 134 yards.

Powell was the Arkansas Prep Player of the Year at Fayetteville. He was a top-20 rated quarterback in the nation by ESPN. He finished his career fifth all-time in Arkansas history for passing yards (10,413) and eighth in touchdown passes (113).

“I knew him when he was in high school and I recruited him when I was at another school,” Lindsey said. “Really a storied high school career. He is a guy that I think is going to bring some competition to that room. I think he will fit in with our team really well. He is excited about getting here and competing. Looking forward to getting him here in January.”