Trojans excited to add more depth at running back 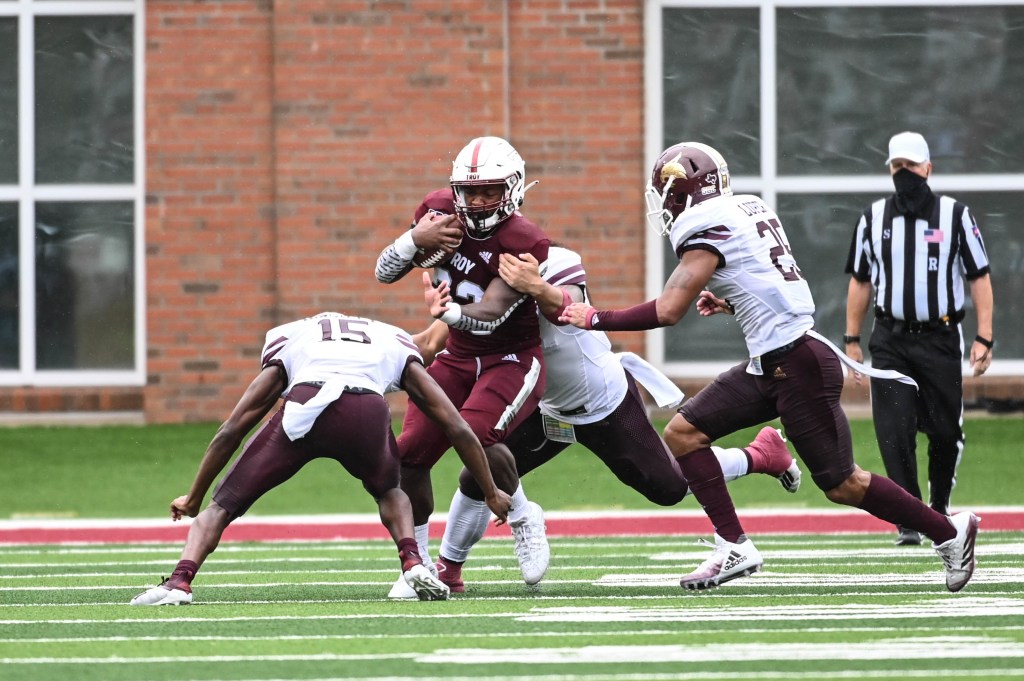 The Troy Trojans added to what was already a loaded running back room when they signed three running backs in their 2021 recruiting class.

That core compiled 1,121 yards in 2020. As a whole the Trojans rushed for 102 yards per game, good enough for ninth best in the Sun Belt Conference.

The Trojans welcome in a former Mr. Football award winner along with a four star recruit and a three star recruit.

“Not having a lot of tight ends, those running backs are huge for us,” head coach Chip Lindsey said. “They have to play on special teams, and with us trying to play some tempo offense, you have to have more than two or three backs. So the future is bright at that position.

La’Damian Webb is a former Mr. Football award winner at Beauregard High School. He won the award as a junior after he rushed for 3,242 yards and a state record 53 touchdowns.

At Jones College, Webb was ranked as the No. 3 junior college running back and the no. 51 overall JUCO prospect by 247 Sports Composite.

At Florida State, Webb rushed for 369 yards and had three touchdowns on 69 carries. He rushed for 109 yards on just 12 carries against North Carolina.

“He is legendary in this state,” Lindsey said. “Led Beauregard to a state championship. A really compact, powerful running back. I have known La’Damian for a long time; recruited him at some other schools. We are thrilled to death to have him here. He will add some depth that room.”

Jarris Williams comes to Troy after playing at Blount High School in Mobile. Williams rushed for 1,352 yards and 13 touchdowns as a senior for the Leopards last season. He is rated as the No. 23 rated running back in the country, the No. 12 player in the state and a four star recruit by ESPN. Rivals.com named Williams a three star recruit.

“He is versatile and could probably play in the slot if we wanted him to,” Lindsey said. “He is such an impressive running back. With how much we throw to our running backs, I think he will fit in great with our running backs. He is a guy I think is extremely powerful, can score from anywhere on the field. Really impressive young man when you get to know him. Thrilled to death to get him here with us.”

Damien Taylor from Tuscaloosa County High School comes to Troy as a top 125 running back in the nation and a top 80 player in the state of Alabama by 247 Sports. Taylor is a three star recruit by 247 Sports and ESPN.

“In the league he played in against the Thompsons, the Hoovers and the Spain Parks of the world, that’s outstanding,” Lindsey said. “His future here is extremely bright. I think his best football is still ahead of him. One of hardest working kids I know that we recruited. Really impressive. He can catch the football, he is physical, he can score from everyone on the field.”