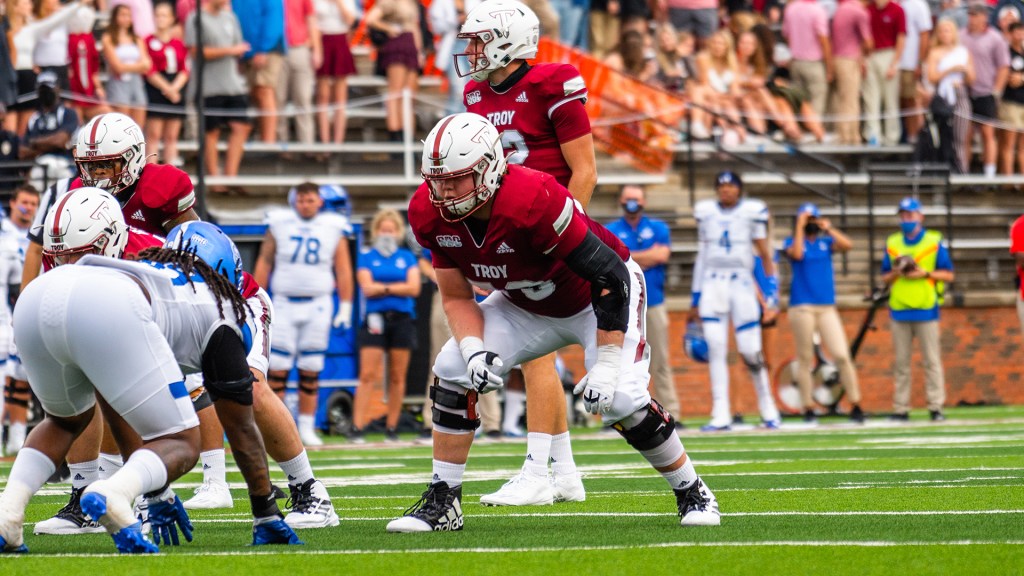 photo/Troy athletics | The Messenger Troy offensive lineman Austin Stidham lines up before a play against Georgia State this season.

Troy’s three first team selections are the third most in the league behind co-champions Coastal Carolina and Louisiana.

Martial, who was a legitimate Player of the Year candidate, leads the nation with 113 tackles, 17 more than any other player in the Sun Belt Conference. The Mobile, Ala., native also leads the country with his combined 239 tackles since the start of the 2019 season.

He finished the year with 10.0 tackles for loss and is one of just nine players nationally to rank in the top 50 in both tackles and tackles for loss. Martial broke up a trio of passes and intercepted Coastal’s Grayson McCall (one of just two on the year) to set up a late go-ahead score for the Trojans.

Martin leads the country with his 45.8 net punting average while his 46.1 per-punt average is sixth best nationally. The Dothan, Ala., native has allowed just four returns on his punts this season for a total of seven yards, while having no touchbacks and 52 percent fair catches.

Martin placed 52 percent of his punts inside the 20-yard line with six landing inside the 10-yard line, and he finished the year with eight punts (32 percent) traveling 50 yards or more.

Stidham anchored a solid Troy offensive line and finished as one of the highest-rated offensive linemen in the country per Pro Football Focus. The Russellville, Ala., native ranks fourth nationally with an 89.1 pass blocking grade and 21st with an 84.7 overall grade from PFF.

Among offensive tackles with at least 350 pass blocking snaps, Stidham was second with a 98.6 efficiency rating, which takes into account pressures and sacks allowed – Stidham allowed just two sacks, one hit, eight hurries and 11 pressures in 451 pass blocking situations. Additionally, he was called for just one penalty in 742 total snaps.

Bradshaw played all 805 snaps at center for the Trojans and allowed just one sack while not giving up a hit on the quarterback. Geiger tied for second in the league with 64 receptions and topped the 100-yard mark four times; he sits second in Troy history with nine 100-yard receiving games in his career.

Choloh is the nation’s top pass rushing interior defensive lineman (min. 400 snaps) with a 90.1 grade from PFF while his 31 pressures are the second most nationally; he finished with 4.5 sacks and 7.5 tackles for loss from his defensive tackle position. Dunlap finished sixth in the league with three interceptions and 11th with nine passes defended.

Jibunor ranks 42nd nationally and seventh in the Sun Belt with 30 total pressures to go along with 4.5 sacks, 7.0 tackles for loss, two forced fumbles and five quarterback hurries. Pettus finished the year with five pass break ups, 58 tackles and returned an interception for a touchdown.

Vidal led the Trojans with 57.3 yards per game and four touchdowns on the ground; Todd’s six touchdown receptions and 12.3 yards-per-catch average paced Troy; Robertson missed only two tackles all season, the fewest nationally among linebackers with at least 400 snaps played; Solomon forced a pair of fumbles and recorded 6.0 tackles for loss and 1.5 sacks.