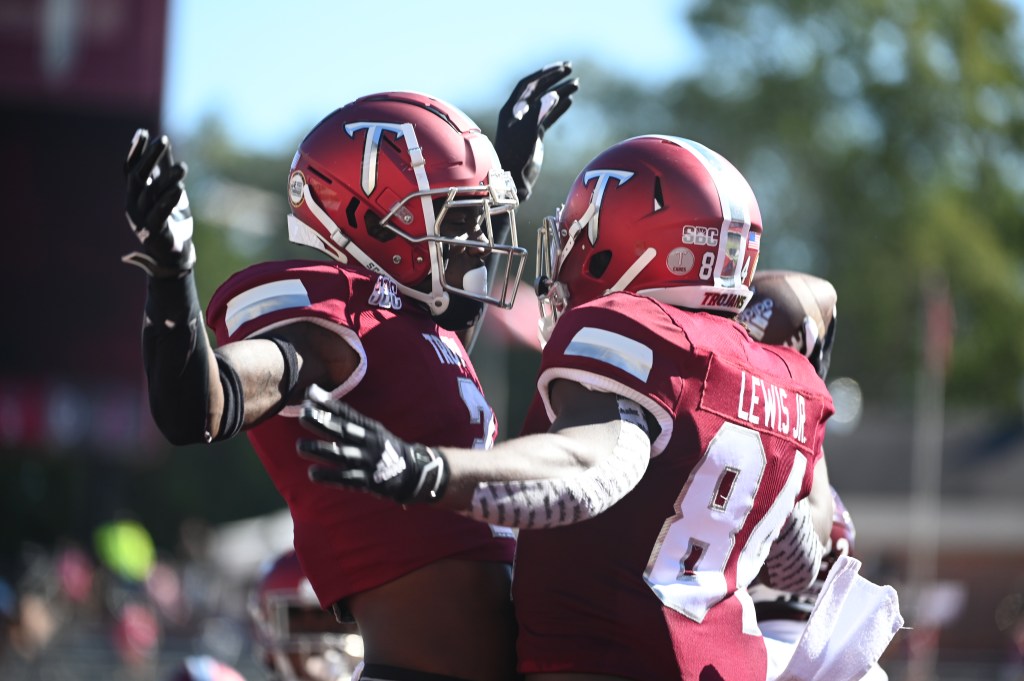 submitted photo/ Troy athletics | The Messenger Troy receiver Reggie Todd (left) celebrates with AJ Lewis. Todd will be joined by four new receiver next season. Todd, a senior, elected to take come back after the NCAA granted athletes an extra year of eligibility.

The Troy Trojans brought in 18 new players on Signing Day earlier this week. Of the 18, 11 of them came on the offensive side of the ball, including four wide receivers.

The Trojans offense finished middle of the pack or towards the bottom in the Sun Belt this season in total yards, scoring and rushing offense.

The Trojans did however finish second in the league with 290 passing yards. The Trojans added to their receiver room when they brought in four new receivers. The Trojans had six senior receivers on their roster including Kaylon Geiger, Reggie Todd, Tray Eafford, Khalil McClain, Sam Letton and Reid Rials. With the NCAA allowing an extra year of eligibility to players, Troy’s receiving group has the potential to be deep and talented.

“Before the announcement we were preparing to lose those guys so that’s the way we recruited,” head coach Chip Lindsey said. “We wanted to make sure we had guys ready to go. I feel like those guys (seniors) will come back and that will just add to our depth.”

Ollie Finch was one of nine recruits from the state of Alabama. He comes to Troy after playing at Etowah High School. Finch was rated a top 150 receiver in the country and is a three star player according to ESPN. He finished his high school career with 325 receptions, 2,540 yards and 16 touchdowns.

“He is a track guy. We always want to add speed to that position group,” Lindsey said. “Played basketball in high school. Just a blue-collar kind of guy. His coach is a former Trojan, so I’m excited about Ollie and what he’s going to bring to the table.”

Perhaps the recruit with the best story is Kyran Griffin-Isom. Griffin-Isom comes to Troy after spending seven years in the United States Marine Corps. Griffin-Isom returned to football in 2019 at Palomar College where he was ranked as the No. 10 junior college receiver by 247 Sports. He caught 61 passes for 754 yards in his freshman season at Palomar and had seven touchdowns.

“Interesting story,” Lindsey said. “Played for a friend of mine in high school. Spent seven years in the Marines so he’s a veteran. A very impressive young man. He got out and went back to junior college and obviously we noticed him there. He is a guy I have been really impressed with. I think he is going to bring a lot of maturity to the receiver corps.”

Peyton Higgins is another receiver from the state of Alabama. Higgins finished with 100 career touchdowns and 8,945 all-purpose yards. He spent a lot of time running the football for Mars Hill Bible. He rushed for 5,201 yards in his career and had 73 touchdowns. He averaged 9.01 yards per carry. Higgins is a top 80 player in Alabama and is a three star recruit by 247 Sports Composite. Higgins help lead Mars Hill Bible to two state championships and one runner-up finish.

“This kid was kind of the do it all kid for Mars Hill Bible,” Lindsey said. “Plays running back for them, but also catches the ball out of the backfield. He came to our camp last year and worked out at slot receiver for us. We think that’s where he fits in our offense. Very impressive young man.”

Deshon Stoudemire comes to Troy after spending time at Iowa Western Community College. Stoudemire ranked as the No. 15 JUCO receiver. He caught 38 passes for 324 yards in his one season in Iowa. He played high school football at Stephenson in Stone Mountain, Georgia. In high school Stoudemire was a three star recruit by Rivals, ESPN and 247 Sports.

“A guy that is really impressive,” Lindsey said. “The best thing about him is his ball skills really jump out to me. The guy has unbelievable hand eye coordination. Really impressive guy on film. He wanted to get closer to home and play in an offense that throws it. We were a good fit for him.”