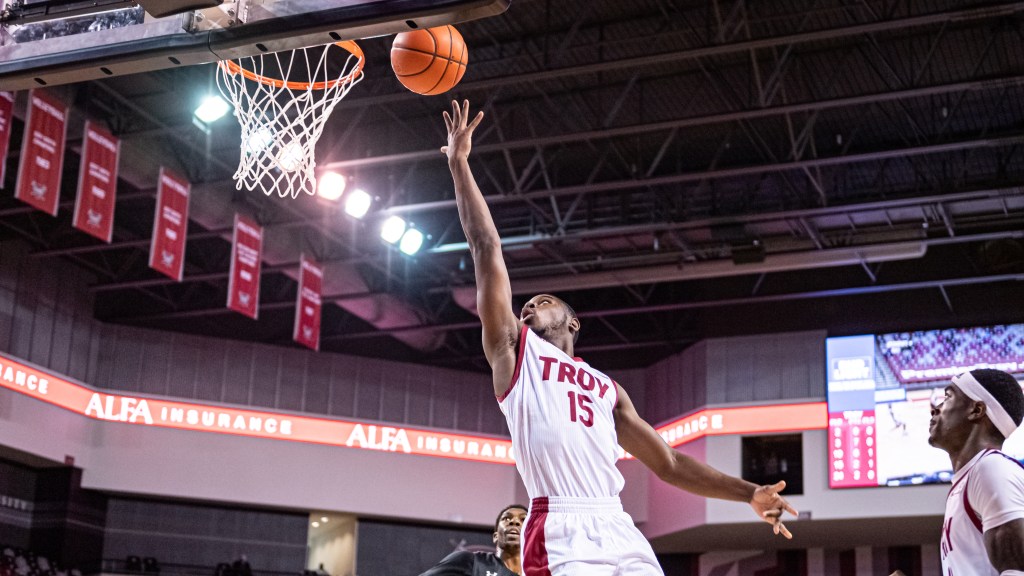 photo/troy athletics | The Messenger Troy freshman Duke Miles goes up for a layup against Central College on Sunday afternoon.

The Troy Trojans return to Trojan Arena looking for their third consecutive win when they take on in-state foe Samford on Wednesday evening.

The Trojans enter Wednesday’s game coming off a 61-44 win over Central Baptist on Sunday afternoon.

The 44 points allowed was the lowest amount of points a Troy team has allowed since 2018 when the Trojans knocked off Carver, who scored 43 points.

“I felt like for 30 minutes we played lockdown defense, the best defense we have played all year long,” head coach Scott Cross after the win. “We held them without a field goal for 10-12 minutes there in the second half. We were moving the ball well and getting open looks in the first half. We tried to play a little faster down the stretch but got a little sloppy. It is definitely a game we can build upon.”

The Trojans enter Wednesday’s game against the Bulldogs with a 3-3 record. After dropping games against North Carolina Wilmington, Texas Tech and Alabama-Birmingham, the Trojans have rattled off back-to-back wins over North Alabama and Central.

The Samford Bulldogs come into the game with a 2-2 record. They are coming off a four point loss to Georgia, 79-75. Samford’s two wins have come against Covenant College and Belmont. The Bulldogs fell to Alabama A&M in their season opener in Birmingham.

The Bulldogs have three players scoring in double figures this season led by Myron Gordon who is averaging 22.7 points per game. Gordon has been named the Southern Conference Player of the Week in back-to-back weeks. Gordon finished with 23 points against Belmont and 29 against Georgia.

It will be just the third meeting between the two schools on Wednesday evening. The Trojans are still in search of their first win against the Bulldogs. They fell to Samford 72-60 last season and 83-79 in 2015.

Game time is scheduled for 6 p.m. and it can be seen on ESPN+