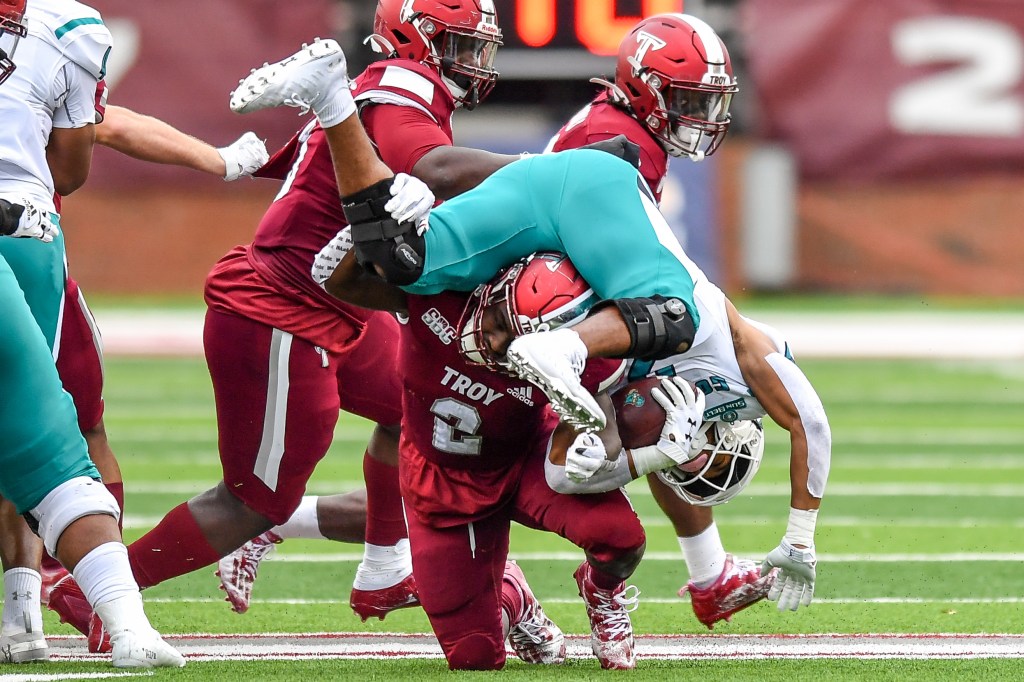 Troy’s Carlton Martial continued to turn heads on Saturday when he turned in the most tackles in a single game than any other player in the nation this season.

Martial recorded 21 tackles, 2.5 tackles for loss, a sack and an interception during Troy’s game against no. 13 Coastal Carolina on Saturday afternoon. For his efforts, Martial was named the Sun Belt Conference Defensive Player of the Week on Monday.

“Carlton Martial was absolutely the best defensive player on the field for both teams,” Troy head coach Chip Lindsey said. “He is the rock on that side of the ball. He is such an impressive young man and a good football player. He impresses me every week. He lays it all on the line. He continues to amaze me. He is what college football is all about.”

Martial’s 21 tackles on Saturday gives him 113 on the season. He has now recorded 100 tackles in back-to-back seasons. He is the first Troy player to do that since 2001-2002. He leads the nation with his 113 tackles this season and his 239 tackles over the last two seasons is 24 more than any other player nationally.

Martial’s 21 tackles are tied for the most in the country this season and it was second most in program history.

Despite his strong performance on Saturday, Martial didn’t take too long to celebrate his accomplishments.

“It was a good effort, and those 21 tackles are great and all, but it means nothing to me if we don’t get the win,” Martial said. “

Martial’s performance came at no surprise to center Dylan Bradshaw, who sees Martial every day at practice.

“That doesn’t surprise me,” Bradshaw said. “I play against the guy everyday. He is hands down the most talented player. He lacks a little in size, but he is the most talented player I have ever played against in my life. He is one of the hardest workers you’re ever going to meet. He is going to do great things. 21 tackles, 2.5 TFLs, a sack and an interception, that’s hard.”